Marsh Lane NR, Blue Tit Nesting News and "Say No to the Mow" 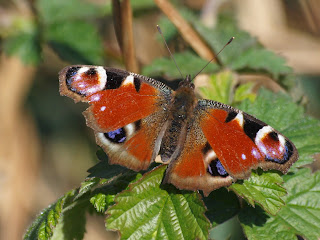 I spent an hour in the warm sunshine yesterday afternoon wandering round Marsh Lane NR.

There were quite a few bumble bees around - Red-tailed and this Garden Bumble Bee. 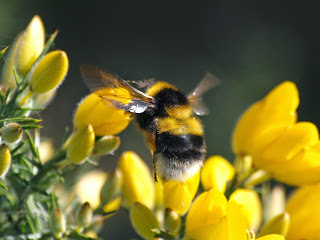 Butterflies, especially Peacock and Orange Tip, together with Small White and Small Tortoiseshell, were flittering around everywhere. 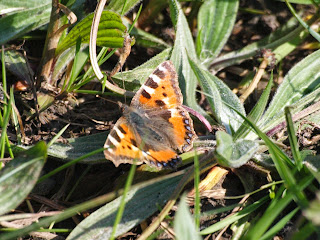 I spent ages chasing after Orange Tip (I think CT will empathise here!!) trying to get a photo without success. They just never seem to alight anywhere or if they do they are up and away as soon as you get within 10 metres of them. I eventually struck lucky in Railway Copse where one was nectaring on blackthorn blossom. Of course, its wings weren't open but you can't have everything! 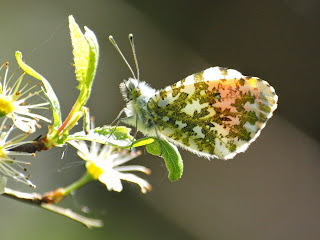 If you enlarge the photo you can see the Orange Tip's eyes and it looks as though it has turned to stare at me!!

I managed to take a lot of photos of Peacocks as they were happily basking on the sun-warmed ground and were quite happy for me to approach fairly close. 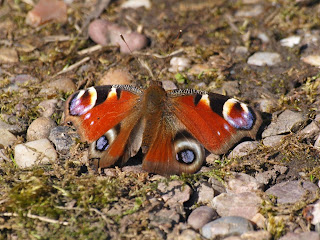 This pheasant made me laugh as soon as it saw me approaching the feeding station it was off! 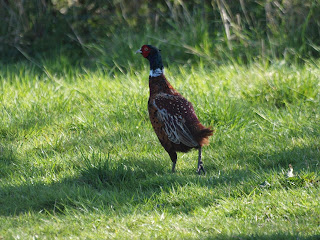 It was lovely to see the freshly emerging leaves, blossom and gorse flowers against the blue sky 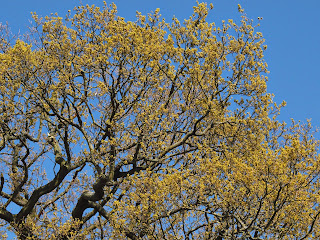 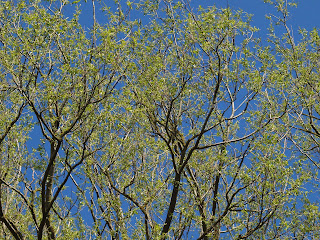 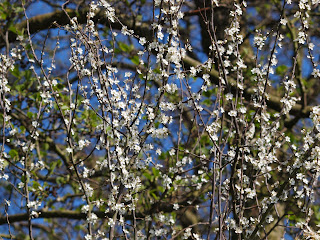 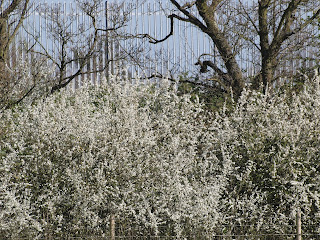 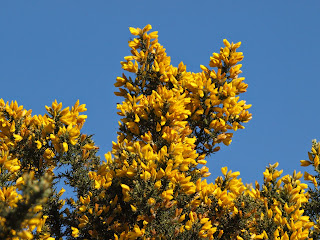 I spotted a Green Woodpecker on a grassy bank near Oak Hide and this was the closest I got before it flew away. I couldn't even be bothered to crop the photo as the woodpecker will be very blurred but if you enlarge the photo you may be able to make it out behind the gate. 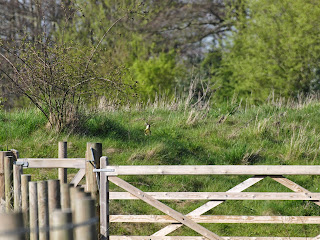 Cuckoo Flower (or Lady's Smock) was flowering everywhere. It is one of the primary larval food plants of the Orange Tip. 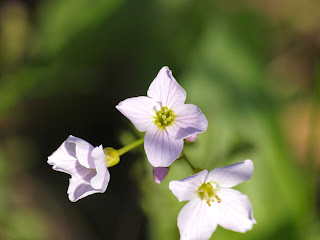 Other highlights of the visit included a Bullfinch and a Mistle Thrush (new species for the Reserve) with a mouth full of grubs so it must already be feeding young. I didn't see any newly arriving summer bird visitors but I only popped into one hide briefly spending most of my time watching butterflies

Leaves are starting to unfurl on the beautiful sallow which grows near the car park. 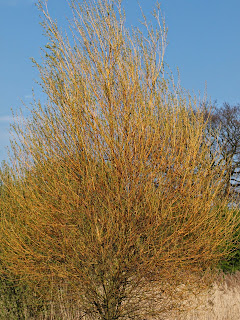 The female Blue Tit finished building a nest in the nestbox with camera a week or so ago and on Monday morning, 14th April, when we switched on the camera and TV she had had laid the first egg.

This is very early compared to dates in previous years since we first installed the camera.

She has been laying an egg a day since. She won't begin to incubate the eggs until the clutch is near completion.


Plantlife is running a "Say No to the Mow" campaign. The idea is to encourage people to leave a small patch of lawn unmown until August to see what wildflowers appear. Results that can then be submitted to their website and will appear on a wildflower map of the UK.

I managed to persuade B not to mow a patch a few metres square in a sunny part of the garden. Its closer to flower beds that I would have liked although its mainly shrubs in the one border. But, even though the lawn is full of moss, it is B's pride and joy so I wasn't going to push my luck and insist on a piece in the middle of the lawn. What is it about men and the desire for a bowling green lawn???

Here's my "no mow" zone to the left of the recently cut grass. At the moment its just a bit taller than the rest of the lawn. 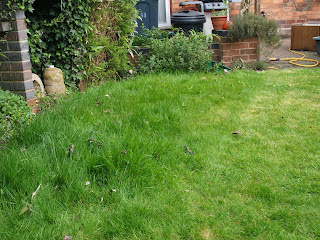 Already a few plants are appearing. Id on this one is ongoing - Red Dead Nettle?? - well it does have a reddish square stem!!! If any one has any idea I would love to know! 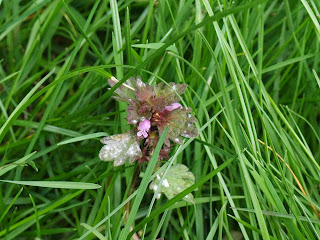 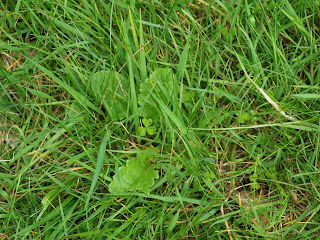 I think this may turn out to be a Bittercress species 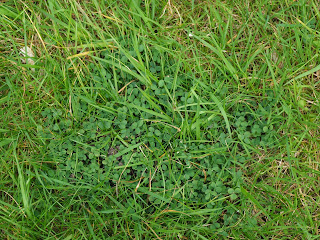 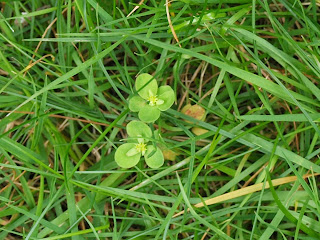 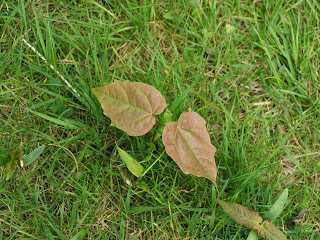 Of course, I am going to get a few garden plants self seeding which won't count and this is bamboo sprouting. 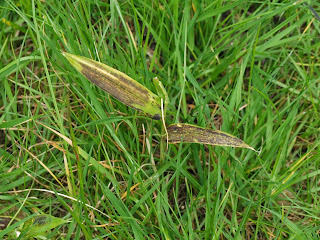 I'll plant more updates as the year progresses as I am really quite excited about what might appear and, of course, it will help my 365 challenge and insect pollinators :) !!

If you would like more information on the campaign please visit www.plantlife.org.uk

Wishing everyone a wonderful Easter weekend 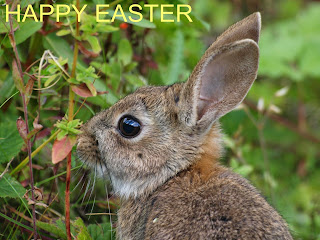 What a lovely spring post! I chased an orange tip with my camera but didn`t get a thing, so I was impressed by yours. It looks beautiful even with its wings closed and does seem to have its (composite) eyes on you!

Great blog post, backed up with some nice shots, Caroline.

Great shot of the orange tip- I think their underwings are as pretty as the orange tips. You did well- I'm STILL chasing a piccy here :-(

We leave a patch of lawn long each year- birdsfoot trefoil appeared there last summer. It just shows what can grow if you give it a chance. Will look forward to reading more about what you find in yours. I'd say the flower is red dead nettle too.

Dartford Warbler - Many thanks. Over the years I've only ever managed a few photos of Orange Tips and never in the garden as they just seem to fly through.

Dean Stables - Many thanks Dean - glad you enjoyed the post :)

Countryside Tales Many thanks and good luck in your OT photo quest!

Great minds thing alike re: red dead nettle :) Hopefully others will be easier to id when they grow a bit more/flower!!

HI RR I enjoyed your post with a great variety of plants, animals and butterflies. Have a wonderful Easter.﻿

Margaret Adamson - Thanks so much Margaret - so glad you enjoyed the post. Have a lovely Easter :)

A lovely post. Happy Easter! I love the underside of the Orange Tip's wings, too - such a lovely pattern. I haven't seen a Bullfinch for such a long time so I envy you that sighting.
So many people appear to be in a frenzy about mowing grass here too and I do hate to see all the wildflowers cut down when the pollinators love them. I hope Plantlife's campaigns make a real difference.

Wendy Thanks so much and Happy Easter to you too :) The OT's underside is rather beautiful - reminds me of lichen :)

I really agree with you about Plantlife's campaigns. I was livid a month or so back when near my mother's and saw contractors spraying herbicide all over the grass verges. I emailed the Council and just got a nonsensical response. Why they can't let wildflowers grow amongst the grass I really don't know :(

An enjoyable post indeed. I think that the tree seedling may be sycamore though I'm probably mistaken as usual.
I'm hoping to do something similar as the uncut lawn but on my newly acquired allotment.

Great to see the butterflies. I have an area of grass I never mow and love it. The red tailed bumble bees love the flowers that come up and I have found lacewing in there too.

John Wooldridge - Thanks so much for leaving a comment. I am glad you enjoyed the post. I think you are right about sycamore!

SeagullSuzie Thanks :) Yes, its a great idea. Have never been able to persuade Brian before as he's just muttered we already have a wild flower area. But that was planted and this will be interesting to see what grows unexpectedly and what insects visit :)

A jolly lovely post RR and believe me I share your frustrations with Orange-Tips, they surely must be the most restless of all butterfly species !!!

I like to leave part of the lawn unmown too though strangely in this household it seems to be the fairer sex whom desire a smooth bowling green lawn.

David Turner Thanks so much David. I think the only "common" species worse than Orange Tip is Holly Blue!

That is interesting about the smooth bowling green lawn in your household :) If I had my way I would convert a lot of it into flower beds and then let rest grow unmown with just a pathway cut through it!! :)

Keep doing what you are doing! Your home is a wildlife habitat! And you are a pheasant whisperer:)

Chris Rohrer - Thanks so much Chris :) One of these days I'll get a decent photo of a pheasant for you :)