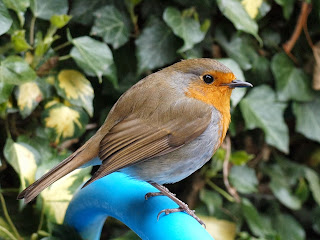 Its the weekend of the RSPB Big Garden Birdwatch - the largest garden wildlife survey in the world when people spend an hour counting birds in their gardens and submitting the results to the RSPB.


I spent an hour yesterday morning counting birds in my garden - thank goodness I didn't leave it until the afternoon when we had hail, thunder and lightning!

I managed to see 12 species (a bit lower than usual - 14 species is about the average count). Everyone always comments how species seem to stay away during the hour they are watching and then maddenly re-appear 5 minutes after the survey has finished!!!!! but I was lucky yesterday in that the female Blackcap and Great Spotted Woodpecker both made an appearance.

This is what I spotted during the hour:


Its a great way to spend an hour, especially if you have young children, helping science and having fun at the same time! 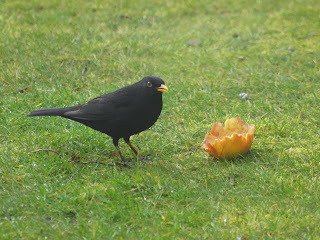 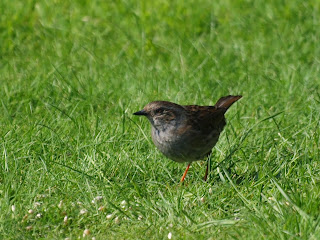 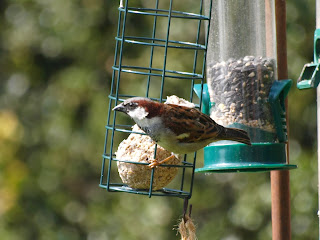 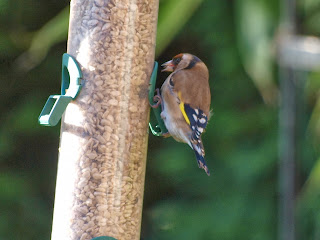 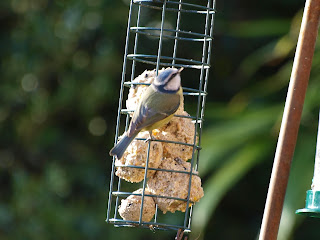 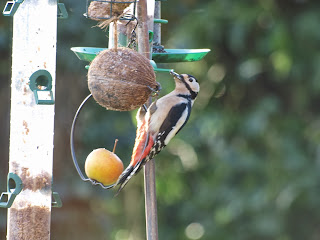 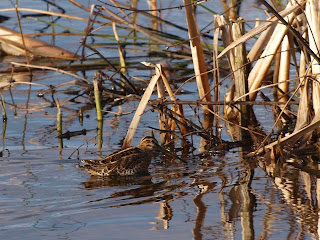 Apologies for lack of posts recently but I haven't really had chance to get out much recently. I did go with E to Leamington Spa last Friday and took the camera in the hope of getting some photos of the more scenic parts. Unfortunately E spent the whole time dragging me in and out of shops so I didn't get chance to use the camera. E managed to get a Cath Kidston mug in the sale at the same time as I talked myself out of buying a bag that I could have used for knitting also in the sale but £38!!!

Today I finally managed to "escape" and spent an hour or so at Marsh Lane NR.

As you can see from the photo below the paths are still very wet! 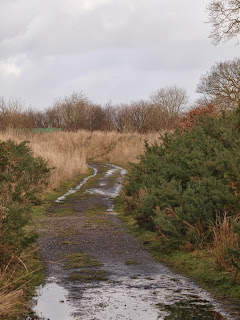 This is a view of Car Park Pool from one of viewing screens. 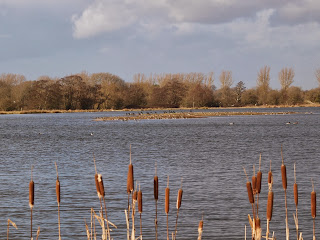 A record shot of a Buzzard soaring high over the grassland. Buzzards are coming more and more common in the area - we even get them occasionally soaring over our garden. 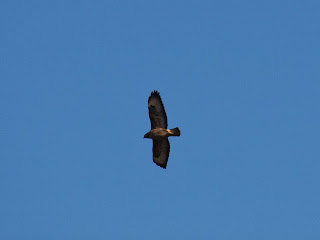 Oak Hide overlooking Railway Pool was empty when I arrived and I got fairly close up views of several Snipe foraging in a channel to the right of the hide in the same place that I saw a Water Rail on a previous visit.

Only record shots again but slightly better than the photo I managed on my last visit :) 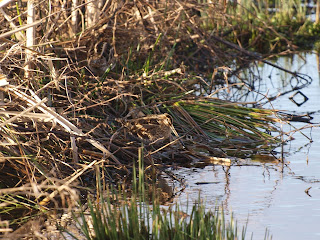 Whenever I've seen Snipe in the past they always seem to be walking and foraging at the edge of water but this individual kept swimming (or is floating?? just been having a discussion with B as to the correct term!!) backwards and forwards across the channel. 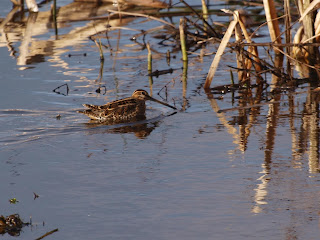 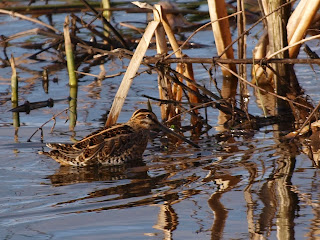 From time to time Lapwings and Black-headed Gulls took flight. 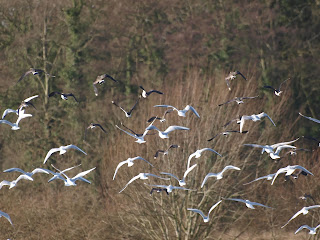 I've been keeping an eye out for a Peregrine that is seen regularly at the reserve but so far I haven't had a sighting.

The real highlight of the visit was a pair of Goosanders on the Pool - apparently they've been around for a couple of days. If you click and enlarge the photo you might just be able to make one out - (they were about quarter of a mile away!). 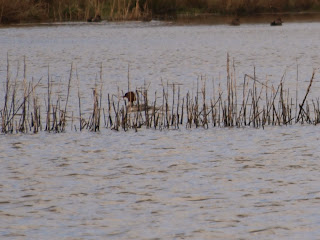 Acting on a "tip-off" I also managed to see a few Yellowhammers in the hedgerow of the crop field. The Common Snipe, Goosander, Yellowhammer and Shelduck bring the list of species seen at the reserve since I first started visiting up to 50. After today's visit my Year List for 2014 stands at 46 which is a good total for me in January.

We've had quite a few visits this month from birds that are occasional visitors - Collared Dove (I know I keep on saying it but they are rare these days in the garden - numbers have decreased as Wood and Feral Pigeons have increased), Stock Dove, and a real highlight a male Bullfinch. A female Blackcap (see photo below) has been visiting the feeders for over a week and Lesser Redpolls appeared yesterday feeding on silver birch seeds. The garden bird list for the year now stands at 20. 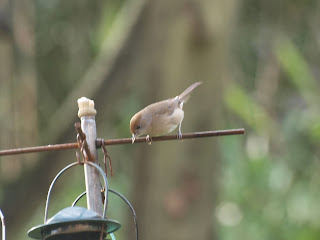 I haven't seen any moths at all this year and haven't yet put the moth trap out.

A few weeks ago I sent off my moth records from last year to the County Recorder and received an email asking if I had a photo of the Hedge Rustic I trapped. Apparently they are very scarce these days in Warwickshire and there have only been 2 records in the last 20 years! I sent off the photo (huge thanks here to CT for her initial suggestion as to the id of this moth!) and he has confirmed that it was indeed a Hedge Rustic and he was really pleased to know the species is hanging on in part of the County. 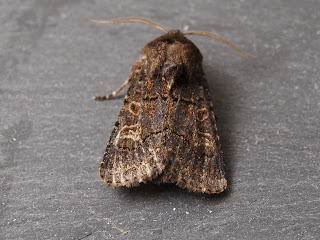 Bearing in mind as to how scarce this moth now is in Warwickshire I had a look through some of my old moth records and photos on the off chance I could find another record of one. I sent the County Recorder a few other photos of unidentified Rustics and lo and behold I had another record from 28th August 2010! - photo below. 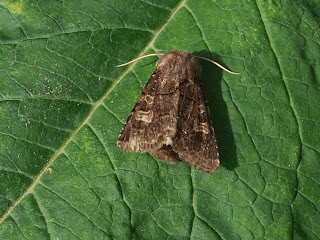 It is a timely reminder of how important it it to send records off to Country Recorders and I can't wait for this August to see if I can trap some more Hedge Rustics!

As a result of this experience (and the Dark Spinach record I have which I only found out by chance is another rare species in Warks these days), I've finally got round to buying this excellent book. 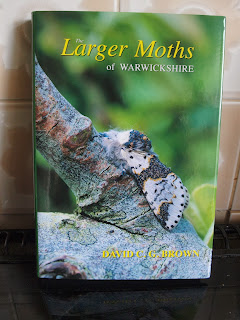 It shows the status of macro moths in the County and I shall now at long last be able to check if any species I trap are rare. When I looked at distribution maps for Hedge Rustic it was interesting to note that there is quite a historical cluster of records for Hedge Rustic in the area where I live.

A Vist to Marsh Lane and A Christmas Carol 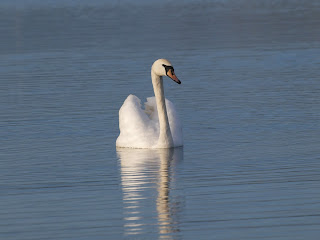 I popped to Marsh Lane NR last Thursday afternoon for a few hours. It was cold and sunny and good to get out in the fresh air. The water levels in the pools were very high after all the rain we had had and the nearby River Blythe had burst its banks in several places.


I've noticed this tree by the car park several times on recent visits and took a photo this time as the colours of the branches are really rather lovely. 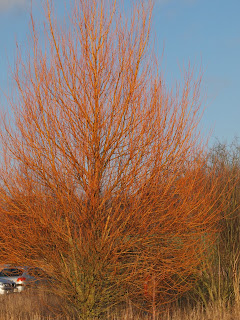 Two of the Mute Swans seem to escaped the usually attendant Black Swan - in fact I didn't see the latter at all on this visit. 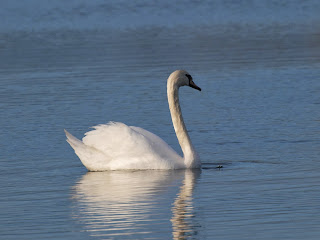 The highlight of the visit was a group of Snipe seen from the car park hide - a new species for me at this reserve. My total list of bird species seen here since I started visiting last autumn now stands at 47 and last Thursday's visit got my year list off to a good start :)

A very poor record shot of the snipe - very heavily cropped (they were a long way away!!). 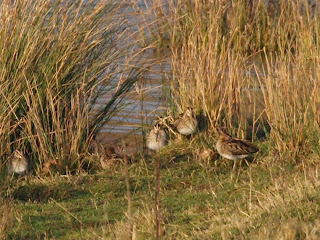 So far this year we've had 14 species of bird in the garden (I'm really pleased the Redwings are still visiting) and with the additional species seen at Marsh Lane the year list is up to 33 species (which is a good start for me!!!). 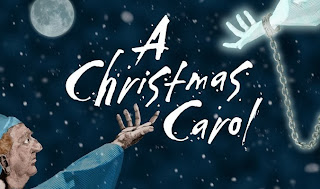 
It was a really excellent production and I thought they had done an exceptional job in creating a play that was suitable for all age groups. It was great to see so many children in the audience enjoying the play so much. The play was suitably spooky in parts and the Ghost of Christmas Yet to Come was particularly good being in the form of a rather frightening grim-reaper type skeletal bird which was expertly controlled by puppeteers.
Posted by Ragged Robin at 17:38 21 comments: