I've been putting out the moth trap regularly in the last week but numbers have been fairly low with just two new species for the year Diurnea fagella and Early Thorn. 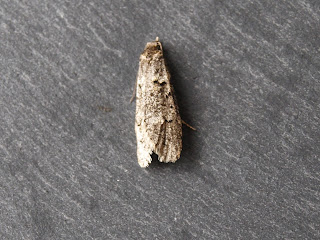 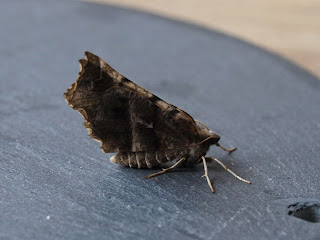 All moth trapping sessions with a 15W Actinic Skinner Trap


I saw my first Orange Tip Butterfly (a male) in the garden on 9th April. In fact, there were several sightings of this species during the day although it could well have been the same individual.


Blue Tits are nesting again in the nestbox with a camera and nesting activity is much further advanced than usual this early in April with the nest already complete and feathers added. I think we may have the earliest laying date ever this year.


Bleeding Heart is flowering in the garden 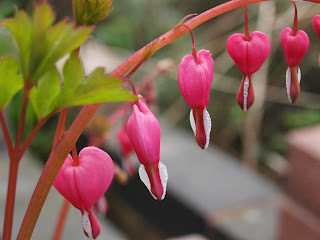 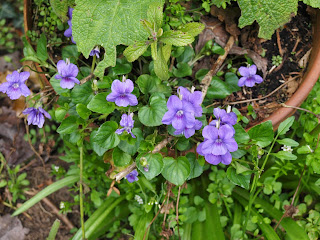 I am not sure what species this shrub is but when it flowers it always reminds me of Far Sawrey in the Lake District. We used to visit every Spring and this shrub used to flower profusely in a garden opposite the hotel. 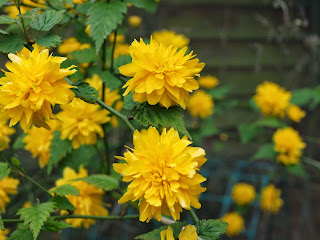 Primulas are providing a welcome splash of colour in the rockery - the new "waterfall" has now weathered and looks more natural. 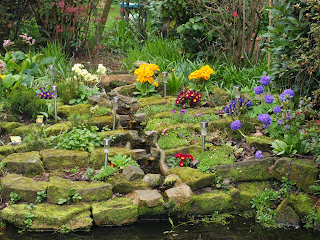 Camelia in flower. Interestingly my neighbour has one that flowers just over the fence and the red flowers of that one attract far more insects and bees than our white variety. 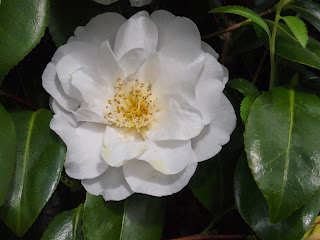 Wood Anemones or Wind Flowers. At night and in wet weather the flowers close the sepals and droop their heads in order to protect their pollen. Folklore suggests that fairies curl up inside the flower having first pulled the curtains around themselves. 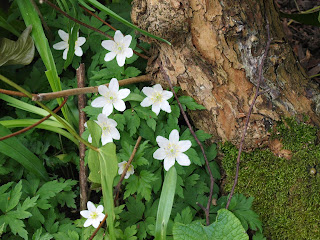 This lovely stone ornament is "Matilda" left to me by a great-aunt. Years ago when I was a child she used to sit at one end of a shell-shaped stone bird bath but, sadly, the many house moves my aunt undertook resulted in the bird bath and pedestal finally cracking and falling to bits and only Matilda survived. 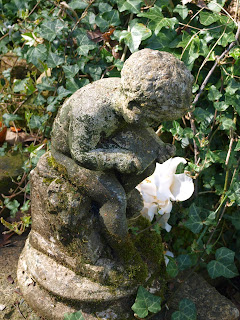 Bluebells are coming into flower. 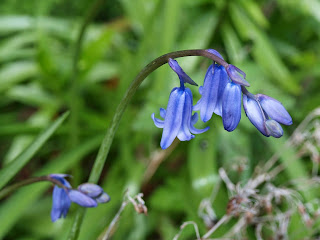 Green Alkanet has suddenly appeared in one of the borders which I'm really pleased about. Its somehow self-seeded itself from outside the garden so I'll be counting this one for the 365 challenge! 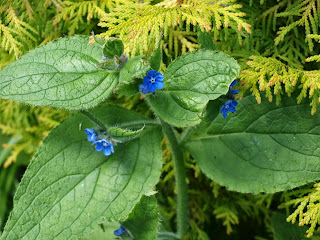 Cowslips have spread around the garden from the original few plants. The one in the photo below is flowering in the wildflower meadow. Cowslips have a variety of country names such as Fairy Caps, key flower, St Peter's Keys, Our Lady's Cushion, Galligaskins and jackanapes on horses. 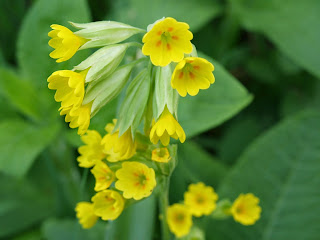 Apart from the occasional cropping, I don't edit my photos but I've altered the brightness and contrast in the photo below - to be honest I am not sure if its improved the picture or not! 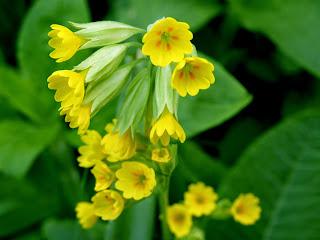 "The cowslips tall her pensioners be;
In their gold coats, spots you see,
Those be rubies, fairy flavours,
In those freckles live their savours..
I must go seek some dew-drops here,
And hang a pearl in every cowslip's ear."

This pile of branches in the wooded area at the top of the garden used to provide a home for hedgehogs although I haven't seen one now for a couple of years. The wood pile will though provide habitat for invertebrates and small mammals and I live in hope the hedgehogs will return. 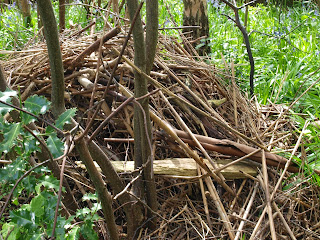 Honesty - due to its transulucent, papery seed heads has many alternative names such as pennywort, money flower, moonwort, silver plate, white satin, lunary, money-in-both-pockets and silks and satins. 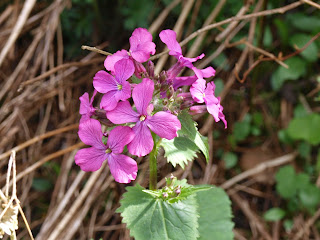 Dandelions are flowering everywhere. Whenever I see this plant I always remember the most delicious Dandelion Wine which my father used to make years ago. 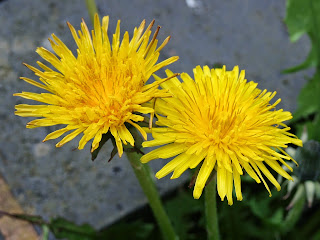 In the language of flowers the dandelion means Oracle originating from folklore which suggests that if you manage to blow off all the seeds of the seedhead in one breath, your wish will come true!


Reference: "Discovering the Folklore of Plants" by Margaret Baker
"The Complete Language of Flowers" by Sheila Pickles

Oh dear, I am SO behind with my blog reading, but what an enjoyable post (especially the wild flowers, which I have been fascinated by ever since I got my first book on wild flowers (Observer's of course) aged 6 . . .

Dandelion wine? Yup - remember my mum making that. She didn't read the recipe properly, which said just to use the PETALS and so we had the whole head in and it never made it to the demijohns! Yuk, Yuk and thrice YUK!!!

Tell me about your moth trap please, as I have a friend who might appreciate one for a birthday present . . .

A fascinating post which I enjoyed reading. I have three suggestions for your mystery yellow shrub: Acacia (but I think the leaves are wrong for it to be that), Azara and Kerria. Loved the alkanet, I'd like some of that myself. I bought Blue Pimpernel (Anagallis) seeds yesterday which I'm hoping will do well in a pot. I wonder whether your white camellia is being visited by moths at night? CT :-)

Bovey Belle - Thanks so much. Don't worry about being behind - I've discovered trying to keep up with blog posts is a losing battle!!

Oh yes, I still have my Observer's books :)

To be honest I can't believe my dad had the patience to pick off dandelion petals. But even if he threw the whole heads in it was the best wine ever tasted. Only rivalled by Elderflower, Elderberry....... Going back to dandelions perhaps you put them in a wine bucket with liquid and sieve before demijohn stage??

My moth trap is the 15w Skinner Actinic Trap. I got mine from Anglian Lepidopterist Supplies www.angleps.com. They are very helpful on the phone. I bought the £167 beginner's kit which includes trap, electrics, bulb, book, and pots. The Robinson traps with MV bulb are better in that they retain moths better and attract more moths but they are over £304.
If you google moth traps you may find instructions to make your own or other suppliers may be cheaper.

Countryside Tales - Thanks so much. Yes, you are right it is Kerria - I remember now I did once id it. I'll have to wander up the garden and check the camelia at night for moths. Although not many around at present. One worn Oak Beauty only last night!!

HI RR What a lovely post. I love all the flower shots. The bleeding heart plants is so pretty, I used to have one but not in this garden. The wine sound good. To bad you don't live closer and I would be the 'taster'!

Margaret Adamson - Ha Ha :) Margaret re: being the "taster". Thanks so much for your comment.

A lovely post about all your spring flowers and your moth and butterfly sightings. A Blue Tit is nesting in my parents camera-box, too - as of today - there are nine eggs! Once again this year I'm put off making dandelion wine because I don't have the time to pick all the dandelions - such a shame.

Wendy Thanks so much :) We have an egg now too - 1st laid today. I meant to add a postscript to Sarehole Mill post and forgot! I haven't made proper wines for years mainly because I miss Dad's advice as to what to do when things go wrong. I remember once my Damson was too sweet and he kindly mixed it with his Damson which (he said) was too dry! to help me out :)

I'm so late to this post but was going to say its a Kerria, as I have 2 in my garden. Violets in the lawn here too, and I saw a lonely bluebell plant along the coastal path. I love the Cowslip song.

SeagullSuzie - Thanks so much. Good to have confirmation of the Kerria - they look so pretty at this time of the year :)