Peppered Moths - An example of Natural Selection in Action 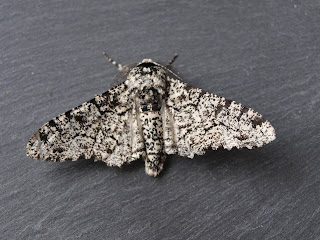 
I was really rather pleased to trap a Peppered Moth (Biston betularia) in my trap on Monday morning as not only is this a beautiful looking moth but it has a fascinating story to tell.

This species is a classic example of evolution by natural selection. Prior to the Industrial Revolution the light coloured ("typica") form of the moth as shown in the photo above was predominant. Its light coloured, peppery marked wings provided perfect camouflage against lichen covered tree bark.

Following the Industrial Revolution a dark, melanic ("carbonaria") form was first recorded in Manchester in 1848. Within 60 years 98 per cent of the moth population of the Peppered Moth in the heavily polluted industrial city of Manchester in Northern England was of this form whereas the the Peppered Moths found in woodland in areas free of air pollution retained the pale "typica" form.

In a classic series of experiments the British ecologist H B D Kettlewell demonstrated that the key factor behind the different forms was differential predation by birds.

In industrialised areas the "typica" light form of the moth was not well camouflaged against tree bark blackened by soot and, therefore, it was found more quickly and heavily predated by birds. However, the black, melanic "carbonaria" form which was well camouflaged was found and eaten far less.

In woodlands in unpolluted areas the situation was reversed. Here the pale "typica" form of the moth was perfectly camouflaged on a background of lichen encrusted tree bark and thus not heavily predated whereas the dark "carbonaria" form stood out like a sore thumb and was easily found and eaten by birds.

Since the Clean Air Act of 1964 was introduced and the subsequent decline in manufacturing industries, air pollution has fallen. The moth has responded very quickly to this change and the dark melanic form has declined considerably.

In 1998 Majerus in "Melanism - Evolution in Action" pointed out various flaws in Kettlewell's experiments.

Today, further studies are being undertaken to investigate the role that natural selection together with predation by birds played in the rise and subsequent fall of the dark melanic form and so the Peppered Moth Story is incomplete rather than wrong.

Currently changes in the colour of the Peppered Moth are still seen as an example of natural selection in action but predation by birds is just one driving factor amongst others rather than bird predation being the sole factor as suggested by Kettlewell. 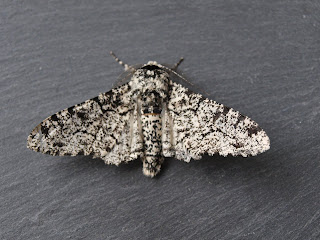 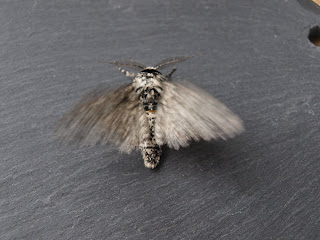 The Peppered Moth - an Update website
www.millerandlevine.com/km/evol/Moths/moths.html
Posted by Ragged Robin at 18:48

A famous moth and an interesting find. Thanks for that link to the ongoing research.

Rob - glad to provide the link. There may be more up to date information on the research but I couldn't find anything else! Sorry I couldn't insert a link that worked for some reason this computer and blogger don't get on and I can't insert links or get italics to work:(

Interesting research....it's strange how nature and manufacturing respond to one another. We had similiar issues in my hometown with certain kinds of birds and insects. Thanks for educating me a little more on moths! I'm learning:)

Chris - Many thanks! I find identifying moths hard but addictive! They are so interesting and many as attractive as butterflies. Even the lbj's of the moth world have incredible markings if you look closely:)