Garden Meadow and Flowers and a Juvenile "Woodie" 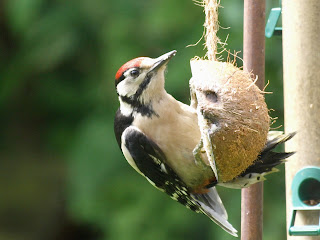 A juvenile Great Spotted Woodpecker has been visiting the feeders for a few weeks now - first with the adults and now on its own.

The newly planted part of the garden wildflower "meadow" has finally caught up growth wise with the rest of the meadow that has been there for many years. 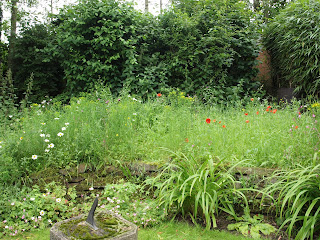 When we first planted the mini meadow poppies dominated in the first year and the same thing is happening again: 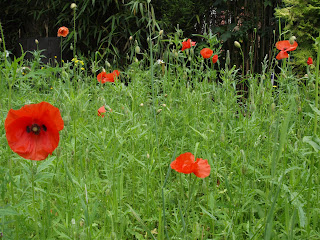 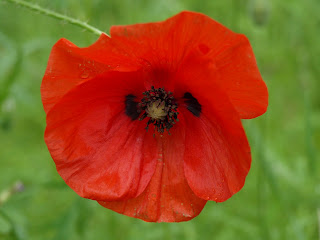 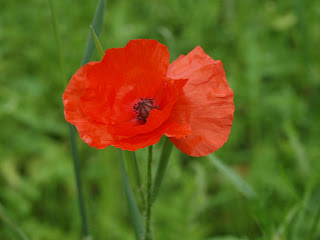 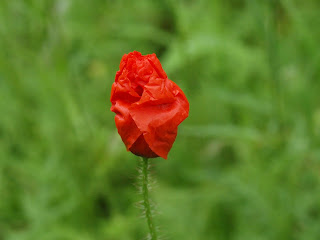 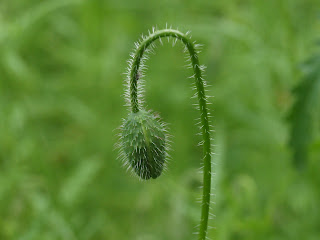 Meadow Buttercups, Ribwort Plantain and Red and White Campion are still in flower and now other species are coming into bloom. 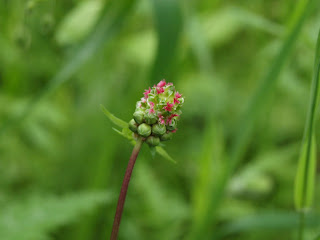 St John's Wort - exceedingly popular with insects (or it would be if it ever stopped raining!) 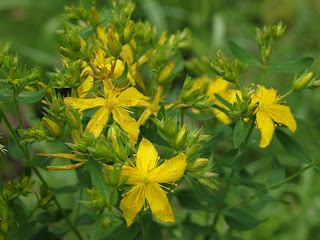 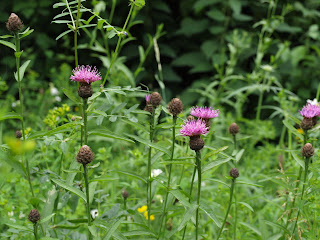 Common Vetch (hopefully I've got it right!) and Ox-eye Daisies 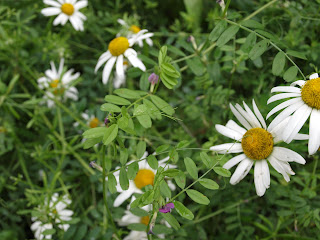 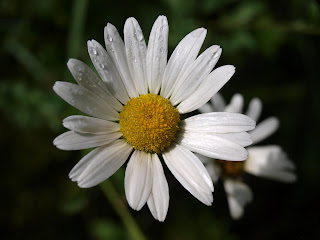 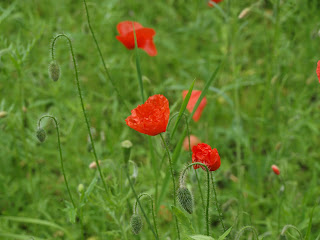 The "nectar" pot I planted with Nasturtiums, Candytuft and Pot Marigolds to attract insects is now coming into flower. I should have thinned the seedlings out more as it looks a trifle overcrowded and caterpillars already seem to be munching holes in the leaves! 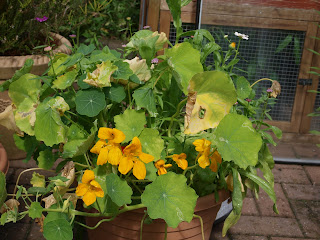 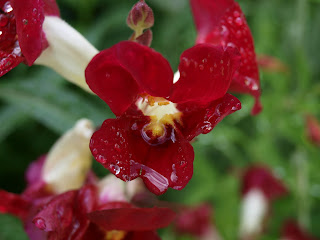 I bought Brian, at his request, a solar fountain for his birthday. It turns out he didn't really want a fountain but just the pump and solar panel to make a waterfall which will fall down the rockery at the back of the pond. I'll show you the finished version one day........! 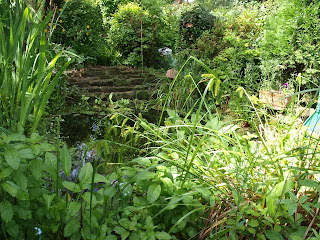 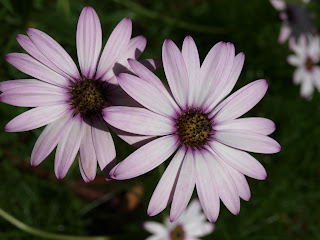 Some more photos of the juvenile Great Spotted Woodie. The photos were taken through a rather dirty kitchen window! 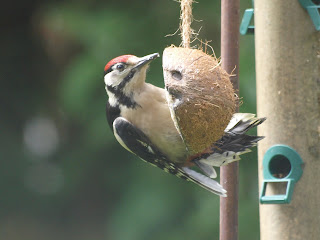 so I've adjusted the brightness and contrast on the rest of the photos! 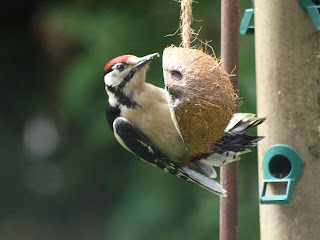 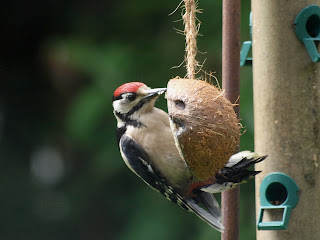 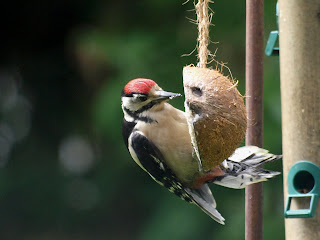 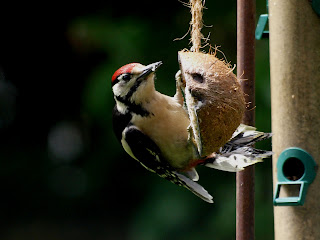 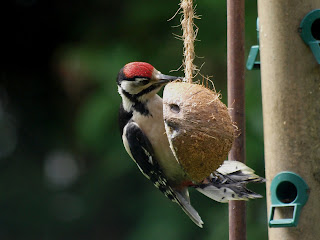 One of my favourite plants at Castle Bromwich Hall Gardens is "Bleeding Heart" or Dicentra spectabilis. I finally managed to get a few roots of this plant recently by mail order and already leaves and flowers have appeared. 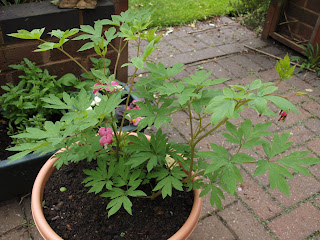 The plant is also known as "Lady in the Bath" and "Lady in a Boat". If you turn up the flowers and open them you can see what looks like a little white lady in a boat or bath. Another common name is "Lady's Locket". 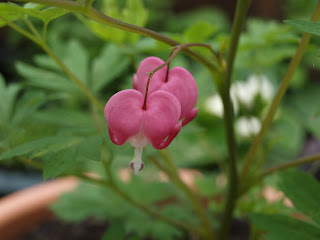 I found a Dunnock's nest in the garden early last week with 2 eggs. It was located at the top of a bay tree and was quite exposed. Two young hatched on Thursday and somehow managed to survive yesterday's torrential rain but sadly, despite covering the top of the bush with chicken wire to try and give some protection from predators, the nest was predated this morning.

I still haven't seen any butterflies recently and bumble bees and hoverflies are notable by their absence. I did run the moth trap last night and had my best catch of the year - dozens of moths in rain-sodden egg-boxes! I'll do a post in a few days as its going to take me a while to identify them all. There are plenty of micros so the new Micro Field Guide will come in handy! I think I have a new garden tick - a Barred Straw unless it turns out to be a Spinach and Uncertain has appeared in large numbers.

Oh and Good Luck to Andy Murray tomorrow :)
Posted by Ragged Robin at 20:24

nice pics of the woody! and there are loads of daisies about at the mo! they are most striking.

oh and COME ON ROGER!

Pete - Many thanks - the motorway verges seems absolutely full of the ox-eyes here too :)

Come on Roger LOL!!! :D TBH I think he will get a lot of support though - Murray never seems to attract Henman-type support!Hopefully, it will be a good match- very excited but very nervous too. Don't gloat to much if Roger wins :)

You have a beautiful garden, Caroline - I love the wildflower meadow! How wonderful to get a woodpecker in your own back garden!

What a glorious post, apart from the predation of course. The Ox-eyes are stunning in their simplicity aren't they?

Omi - Many thanks! Its wonderful that the woodpeckers have become constant visitors over the last 3 or 4 years. Before that it was just the occasional visit.

Toffeeapple - Many thanks. I love the Ox-eyes too - as you say they are so simple in design and colour and yet so beautiful!

Your woodpecker is great. I have to smile. My dining room windows were the same. In fact, 3 days ago I went out and finally cleaned them. The smudges were driving me nuts and I couldn't get clear pics of the hummers! So, I washed and washed:) Your garden and poppies are lovely. I like all the color and detail you've put into the area. The water is wonderful. Thanks for sharing!

Hi Caroline, What a lovely post! Lke Omi, I think it's wonderful that you have the juvenile GSW visiting your garden, lovely photos of it! I love the photos of the poppies too. Your meadow has come on beautifully, no doubt helped by all the rain.

What a shame about the Dunnocks especially after your valiant efforts to protect them.

Talking of valiant efforts :-) I thought Andy did a great job and I think it was more a case of Federer winning it rather than Murray losing it, if that makes sense. I thought it was a most enjoyable final despite not having the outcome we were hoping for!

Chris - Many thanks. I'm ashamed to say most of my windows are in a similar state :( but usually the kitchen one is cleaner so I can see the birds in the garden!

There are more and more poppies opening now - there were about 50 flowers on Sunday :)

ShySongbird - Many thanks Jan. The only advantage of all this rain (its pouring again here yet again as I type!!) is that so many species of flower seem to be doing so well.

I was upset about the dunnocks especially as they had survived Saturday's rain.

Quite agree with your comments about the tennis - I think Federer is unbeatable on his day. But it was a great match and hopefully Murray will win a grand slam one day. He certainly seems to improved a lot since Lendl joined his team :)