Minimum temperature on Friday night, 27th July, dropped to 8.3 degrees centigrade but there were still several new species for the year in the trap on Saturday morning.

First of all the elegant Willow Beauty 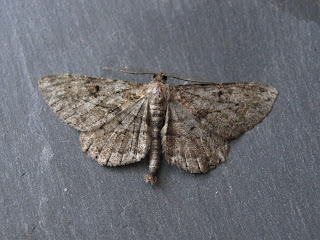 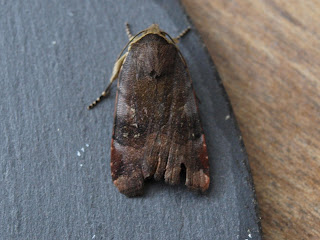 The collar on this species is a delicate pale green when freshly emerged. I think this particular moth looks rather cute as if its wearing an alice band! 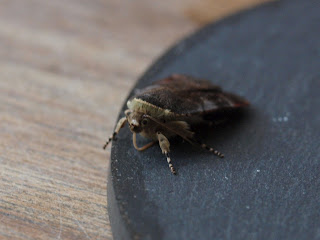 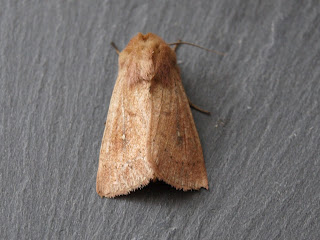 Marbled Beauty - these pretty little moths look as though they are covered in lichen (apologies the next 2 photos are rather blurred!) 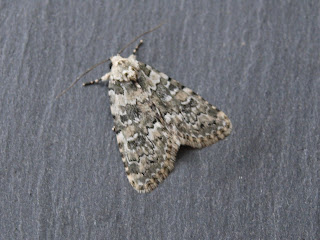 Common Rustic - it is impossible to distinguish between Common, Lesser Common and Remm's Rustics without dissecting genitalia so this will remain the Common variety! 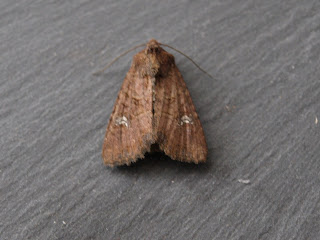 Riband Wave - not new for year but I love this species 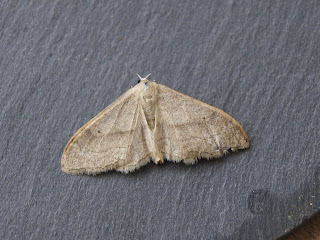 and a nice looking Dark Arches 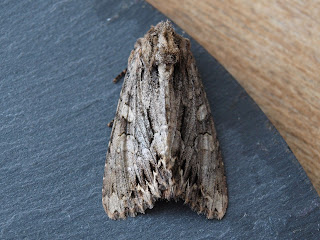 I am struggling on this micro moth. Its quite large for a micro about 12mm long and wingspan about 4mm. Looking at the new micro book my best guess is Athrips mouffetella which would be a totally new species for the garden. 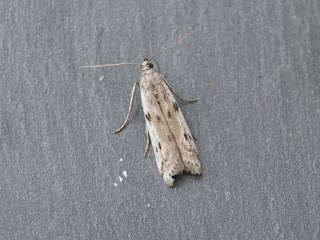 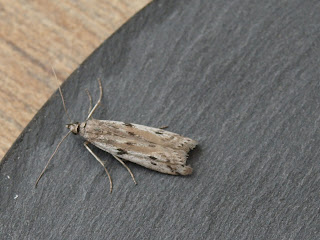 As always if any of my identifications are incorrect or if anyone can help with the micro I would be exceedingly grateful.

Edit the micro is Phycitodes binaevella - a new garden species.
Posted by Ragged Robin at 12:24

Nice record keeping Robin. That face on the one moth above the word "Clay" is really cute. There are some really beautiful moths showing up in your garden. The tiny ones are difficult for me to capture on camera......well the butterflies since I take more pics of them. Hope some more show up on your studies:)

Chris - Many thanks. Glad you like the cute face :) The really tiny micro moths are hard to get photos off as some are only about 5mm long! I'm still using the 14-42mm lens on the camera as I'm struggling to get the hang of the macro lens! I need to read up more and experiment more with it I think. The trouble with moth photography is (like butterflies!) you don't get long to take a photo as the moths quickly wake up from a few hours in the fridge so I've reverted to the lens that is quicker to use and focus! Even then many photos are a bit blurred :(

Hi Caroline, Your micro looks like Phycitodes binaevella. Your Willow Beauty doesnt look right either but I cant place it, it certainly doesnt look like one of mine. Maybe email the pic to an expert ( Try Skevs blog he's good) and I've never seen a Dark Arches like that. Some strange goings on down there...Stewart

Hi Stewart - Many thanks for the help with the micro - I've found it now in the new book. As for the others I think I will be going to the bottom of the class :) or should it be :( !! I'll edit the blog tomorrow re: the micro and email photos to an expert too - I'll recheck my id guides and websites and then try Skev or the County Recorder. I would try the GMS yahoo forum but I haven't a clue how to post pictures on there! Thanks again for your help :)

I have a feeling one could spend a lifetime trying to get to grips with identifying moths, there are so many of them and so many similar :-)

ShySongbird - Many thanks Jan. Its very easy to get totally hooked on moth id :) And you are so right about so many being similar. I despair at times :( I've emailed an acquaintance to try and get more help on the Willow Beauty and Dark Arches :) In fact, you can probably see why I am not overly concerned at the huge amount of micros that disappear before I can pot them!!