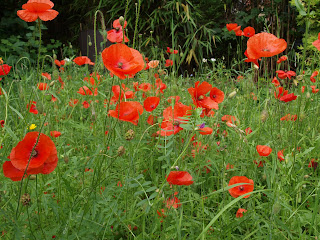 The wildflower meadow in the garden is probably looking its best now. Regular visitors to this blog may recall that one third of the mini meadow was re-seeded earlier in the year after being dug over to remove the couch grass that was beginning to dominate.

Poppies are the main flower in the newly re-seeded area although this will change over the years as other species establish themselves. 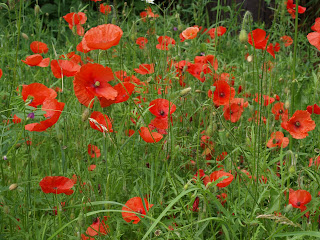 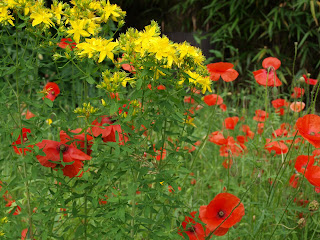 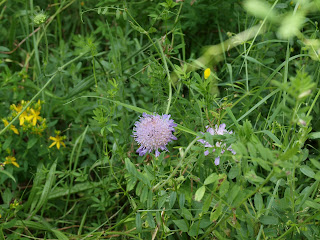 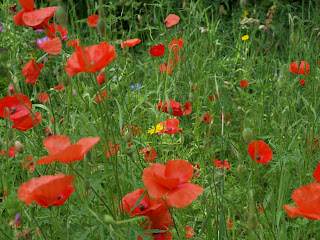 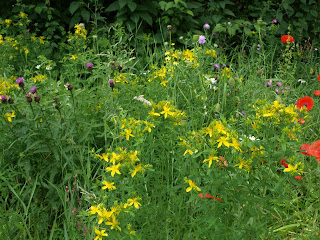 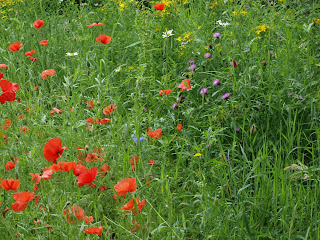 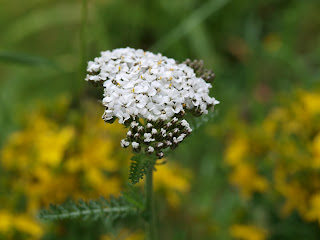 In flower at the moment in the garden "meadow" are St John's Wort, Poppy, Ox-eye Daisy, Cornflower, Corn Marigold, Field Scabious, Lesser Knapweed, Meadow Buttercup, Salad Burnet, Field Pansy, Yarrow, Red Campion, Common Vetch and Trefoil. There were several hoverflies and bumble bees amongst the flowers this morning and hopefully as summer finally arrives over the next few days and we get some sunshine their numbers should increase. 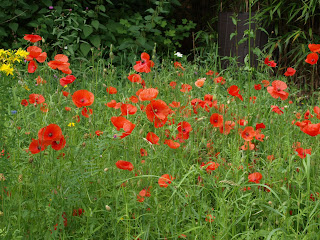 Absolutely lovely! I love the color of these poppies. And yarrow is another favorite. I imagine the butterflies would like this plant very much. You know...I've tried growing wildflowers but the darn birds ate all the seeds. Little stinkers:) Hope all is well. Chris:)

Rohrerbot - Many thanks Chris - its particularly colourful this year :).Although unless we reseed another area the poppies will be nowhere near as plentiful next year. We were lucky with the birds. They didn't seem to eat too many. You could try covering the seeded area with netting perhaps?

I'm fine thanks. Hope you are too - is it any cooler? and enjoy the rest of the weekend!

Actually yes. We've had wonderful rain now for two days in a row! Love it. I was excited to find this link. I actually met this blogger in Tucson this past winter during a birding outing with those Cedar Waxwings. She's a professor of bugs and really knows her stuff. I thought you might like to see her moth set up etc. here in Tucson. It really has been a fun summer full of critters and her bugs are even stranger than mine today. I didn't even know we had the Silkmoth here! Not to savvy about bugs, but I thought you might enjoy her write. I'm cleaning this weekend around the house...not too fun:(
http://arizonabeetlesbugsbirdsandmore.blogspot.com

A beautiful wildflower meadow in your backyard, well done. The poppies so striking.

Rohrerbot - Thanks so much for the arizona beetle lady link - as you say she certainly knows her stuff! What a brilliant blog - I will revisit it. So glad you have cooler weather and rain! Our rain has actually stopped and its going to be dry and hot next week - I shall soon get fed up of it as I don't like the heat!

Sorry to hear you too are busy cleaning - yesterday here ironing etc., today cleaning the kitchen:( Oh well the kitchen is finished now so off to empty the moth trap which is in a cool place in the garage.

Thanks again for that super link :)

Ian - Many thanks. So glad you like the wildflowers - hopefully as it gets sunnier and hotter next week it will be buzzing with insects :)

Lovely wildflower meadow pics, the poppies look wonderful. I haven't been online for a few weeks, so I've lots to catch up on & this is a nice start. Linda

Kirstallcreaturs - Hi Linda thanks for your lovely comment. There is really something rather special about poppies :) Hope you are ok - have missed your blog postings. All the best Caroline

Hi Caroline, it must look wonderful! Your lovely photos certainly show that it does. The poppies are beautiful, so colourful. Is the meadow attracting any butterflies now we at last have some sunshine?

I went looking for Dark Green Fritillaries yesterday but no luck...I did find more Marbled Whites though and they were in a different location from last time. What a treat to have sun at last :-)

ShySongbird - Many thanks Jan. Not seen many butterflies in it but plenty of hoverflies and bumbles today :).

Did you get round to deciding if you were going to plant your own? Or you can always leave a patch of grass unmown and see what comes up if you haven't tried this already.

Well done on the Marbled Whites - a shame though about the DGF's. Hope you get to see some soon. I popped out this afternoon and managed to see quite a lot of butterflies - comma, meadow brown and gatekeeper. Amazing how quickly they appear once it gets hot and sunny :-)