Search for Spotted Flycatchers in a Churchyard 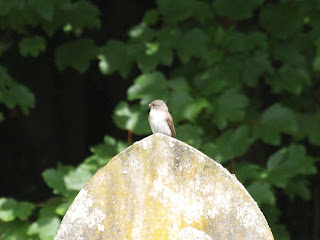 It was the first dry, hot, sunny day for ages so this afternoon I popped along to a local churchyard where I found a family of Spotted Flycatchers last year. 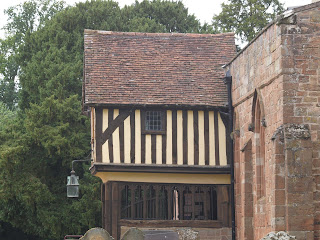 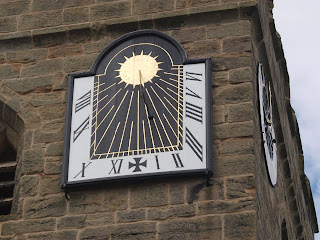 I wandered round for ages - there were lots of blackbirds, jackdaws, swallows, robins, dunnocks and blue tits about but no sign of any Spot Fly's. The churchyard was a lot "tider" than St Giles but areas of wildflowers had been left and in one area there was a lovely mini meadow full of Fox and Cubs (I seem to be seeing these flowers everywhere at the moment). 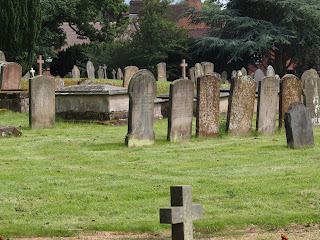 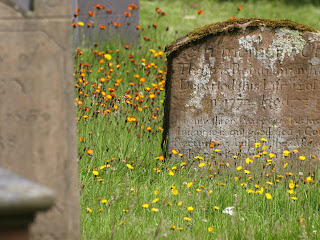 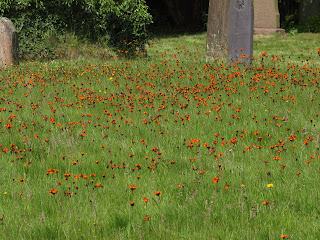 Just as I was about to give up and leave I finally saw a Spotted Fly at the back of the war memorial. 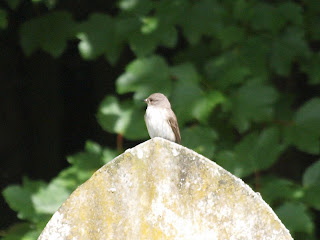 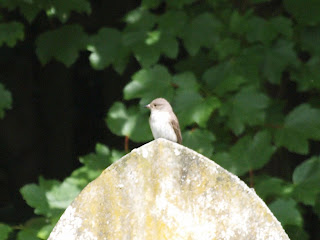 The bird was at least 30 feet away far too distant for the 70-300m lens. I did try creeping up by hiding behind gravestones and moving slowly forward and lurking behind a yew tree all to no avail. The bird flew off as soon as I began to get closer. Goodness only knows what any passerbys must have made of my suspicious looking manouevres :)

The UK Spotted Flycatcher population has declined by 79% between 1980 and 2005 and this species is now on the Red List of Birds of Conservation Concern and also listed as a Biodiversity Action Plan (BAP) Priority Species so its good to know that a pair are back in this churchyard again.
Posted by Ragged Robin at 21:41

Good news about the flycatchers, and that's a beautiful photo of the flowers among the gravestones.

love the photos of the flowers amongst the gravestones.

well done on finding the Spotted Flycatcher. They don't standstill do they!

Pete - Many thanks. They are rather lively birds! I did get a bit closer at one stage only to find the camera had focused on a hawthorn branch and not the bird!

Oooh, very well done Caroline!!! Have I turned a funny shade of green?... N n n ...YES ;-) I think you captured it beautifully. I had to smile about the camera focusing on the branch, that is the bane of my life, I'm sure I delete far more photos than I keep! Goodness, a 79% decline, that really is appalling and so sad, no wonder I haven't been able to find one.

I love the photos of the flowers too, they must have looked a picture!

I haven't seen a SF all year (mind you I haven't specifically looked). But at least their predictable hunting habit means you should find them again easily. Love the fox and cubs too - just coming up in our lawn

ShySongbird - Many thanks Jan. Sorry to make you so green! Good luck in your search for one. Not sure how often you go to Draycote Water but I think Napton churchyard near there is THE place to go for Spotted Flycatchers. Although its not the churchyard I visited.

Glad its not just me with the camera focusing on the wrong thing!! I tend to rely on autofocus as manual focusing is such a fiddly thing that by the time I've to everything nearly in focus the bird has long flown!

The flower "meadow" just made my day - it was really quite beautiful.

The Wessex Reiver - Here in Warwickshire Andrew I've only tended to see SF's in churchyard although a couple of times we've been really lucky and had them in the garden as they migrate.

Enjoy your fox and cubs - I wish we had some in our garden. They really are attractive flowers.

Good news for a bad situation. It seems like a lot of birds have been affected in your areas by something?? Hopefully they will make a comeback. Very cute birds to have around. I LOVE the shot of the orange flowers next to the gravestone. That is right out of a magazine. Nice capture.

Hope all is well with you. It has been a bit crazy here. Like you've stated in previous posts, sometimes you don't have the time to take the road trips. Well this has been happening to me lately and it's driving me insane!!! Anyhow, hope you are having a nice weekend. Talk to you soon:)

Rohrerbot - Many thanks Chris. Glad you like the orange flowers photo. Its horrifying the amount of birds/moths/butterflies etc. in decline - due to many reasons intensification of agriculture, habitat degradation and fragmentation, climate change etc.etc. although with some of the migrants reasons are not fully understood.

I'm fine thanks - though still limited timewise and when I have got a few hours spare its raining and not the best of weathers to take a camera out! So sorry to hear you haven't had time recently to get out - I can truly sympathise! Hope the situation changes soon for you and you can make some trips. Have a great weekend too :) All the best Caroline

I always feel so dreadfully sad when I hear of things being placed on the Red List, frustrated too. I am so glad that you got to see the SFs. Fingers crossed that you continue to see them.

Toffeeapple - The declines of so many species is really rather depressing - I try very hard not to think what the countryside will be like 100 years from now :(

oh well done Caroline.. and yes very sprightly birds! and I love the wildflowers growing in the graveyard - such cheery colours in this dull weather :D..

Tricia - Many thanks. I wonder sometimes if it is ever going to stop raining! Forecast for next week looks dire again too :(. At least the flowers remind us of summer!

Looks a lovely churchyard. Well done for finding a Spotted Fly at the last minute!

Omi - I was well-relieved to finally see one to be sure :) I did know they were there again this year somewhere as another blog written locally had mentioned them!