On Thursday morning a Company turned up to clean the caravan exterior and to be honest I felt a bit on show so decided to go and have a look again at nearby St Leonard's churchyard in Hatfield.

I parked opposite the church where there are spaces.  Lots of wild flowers on the grass verge - Ground Ivy and Lesser Celandine. 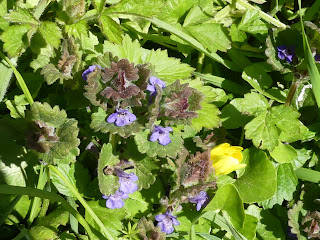 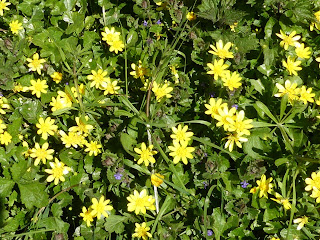 St Leonard's Church, Hatfield (sorry not the best of photos but it was taken into the sun - there is a better picture later of the south side of the church). 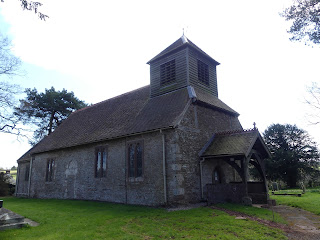 St Leonard's has a 11th century nave (possibly pre-Conquest). It is partly built of tufa and was extended west in the 14th century when it is likely the chancel was rebuilt.  The church was restored in 1878 and 1903.

Primroses galore in the churchyard and also daffodils. 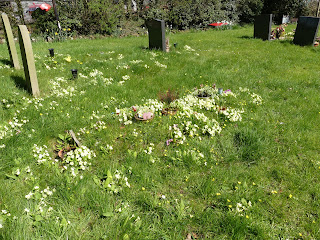 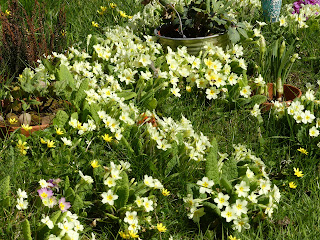 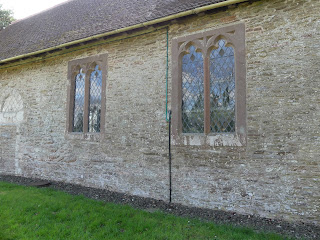 The North doorway is Early Norman with a lintel of  3 large stones.  The tympanum is "opus reticulatum" - square stones set diagonally.  There is some herringbone masonry near this door but I managed to forget to take a photo! 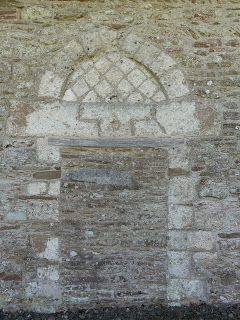 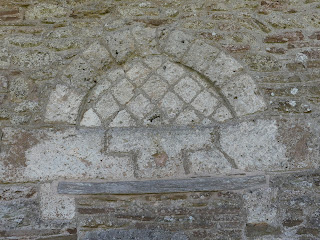 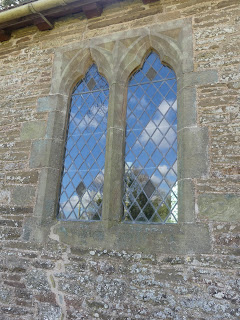 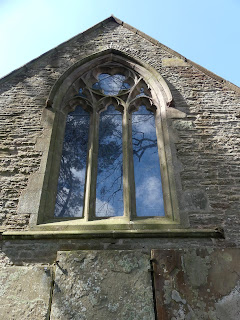 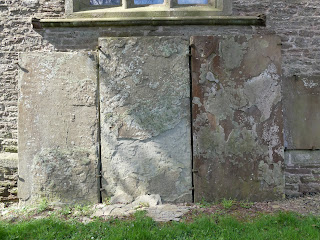 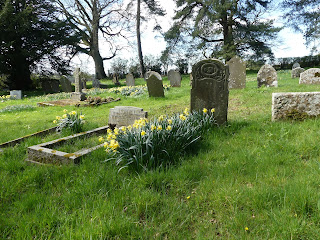 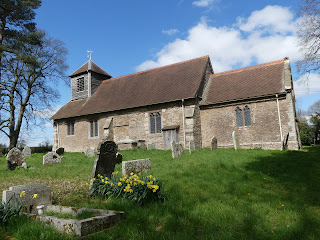 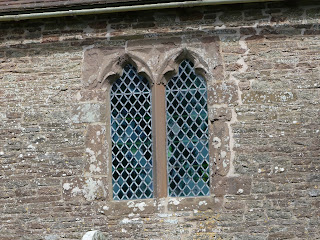 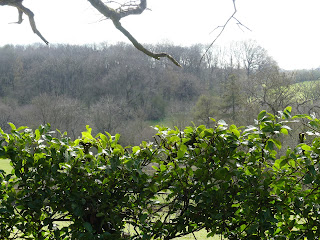 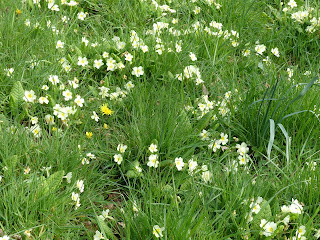 The South wall was rebuilt in 1723 after it collapsed!  The Bell Turret may be medieval but the present weatherboarding dates from 1903. 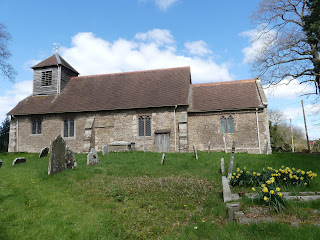 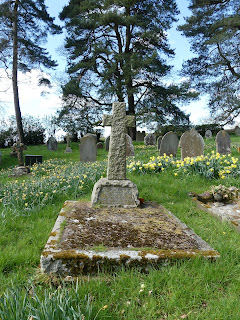 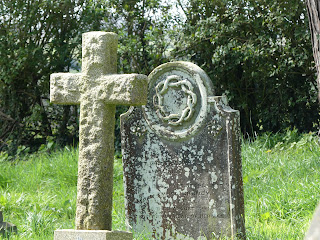 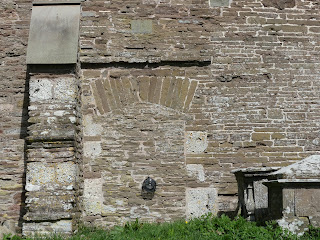 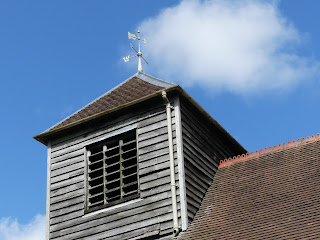 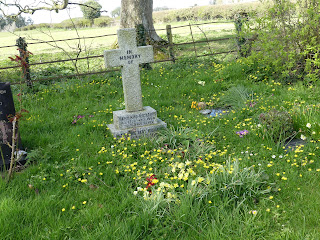 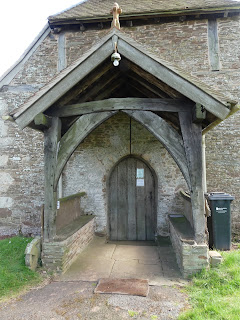 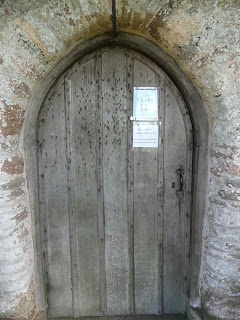 The church was open and I was very tempted to go inside but to be honest I am still hesitant of going in buildings and in the end couldn't be bothered going back to the car to get a mask. I will hopefully go in one day.

When I got back the cleaners had gone!  To be honest I was a bit surprised that they had only waxed the metal work as I assumed they would clean the roof and windows!!

Timothy ventured forth to relax in the picnic chair and watch the birds! 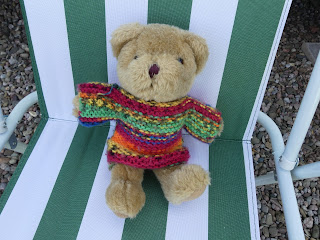 In the afternoon we went into Hereford for a brief walk round the city centre, exterior of the cathedral and a walk along the River Wye but I will leave that for the final post.

All photos taken by me with the Panasonic Lumix FZ330

What a lovely old church, and surrounded by God's Little Acre.

I am looking forward to your wander around Hereford. Tam was there on Saturday, meeting a friend.

Bovey Belle - Thank you. The churchyards in Herefordshire are so lovely as are the churches.

Wander round Hereford a bit of a route march unfortunately as OH not interested in buildings and just wanted to go to the river :( Photos taken in a heck of a rush as he got fed up every time I stopped!!!!

I enjoy your wanderings a lot, being without a car it's now impossible to go anywhere other than on foot. Am I being overly critical if I say that Bell Turret looks incredibly out of place? We're rather ecstatically happy to see Timothy! The primroses are so lovely this time of year.

that looks lovely! and it was great to see Timothy again :)

Rustic Pumpkin - Thanks so much. So pleased you enjoyed the wandering posts. I think it does a bit but according to Pevsner the weatherboarding was added last century so newer than rest of church. Timothy says thank you and he wishes Treasure could join him. He still doesn't get taken out though but remains at the caravan!! I do rather love primroses :)

What a lovely church and churchyard it looks so tranquil with all the spring flowers in the sunshine. Inside will be waiting for when you feel that things are safer. I'm looking forward to your next posts. It seems ages since we visited Hereford:)

Rosie - Thanks so much. We last went to Hereford about 8 years ago to see the Mappa Mundi. But my grandfather came from Hereford so we went a lot as a child.

The Quacks of Life - Thanks Pete - Herefordshire does have some super churches.

Church looks lovely, especially like the old wall. Leave him at the caravan next time (:
Amanda xx

Amanda Peters Thanks so much. lol re: leaving at caravan. He has no interested in churches or buildings or photography which can be a pain at times!!!!!

The church and the surrounding blooms look lovely.

Wearing masks in some places such as a church spoils the experience. So I would rather go back at a later date and enjoy the experience in my way :-)

CherryPie - Thank you - yes masks do ruin things somewhat but understandable atm. Oh to go back to life 15th months ago!!!!

Churches that old are just lovely. They don’t need all the fancy stuff of newer churches or cathedrals. There’s so much history and interest in just quite plain things like the bricked up old doorways. Plus the churchyards are full of interest too. Glad you’ve been having a good time making up for the winter lockdown! xx

Millymollymandy - Thanks so much. Yes you are so right about old churches! Give me a medieval church anytime over something much newer as it is the history you mention that really interests me. It was good to escape and so thankful for the caravan.