The caravan park in Herefordshire finally re-opened last Monday so on Tuesday we drove down to spend three nights at the static caravan. It was good to be back after five and a half months without a visit. Normally they would re-open at the beginning of March.

After unpacking we drove to Leominster for a click and collect food shop at Morrisons. I was amazed at how easy it all was. You park in an allocated bay, tell them by phone you have arrived and they bring the shopping out in trays and then disappear while you pack it into your own bags and then fetch the trays after you have left.

Timothy on the journey. 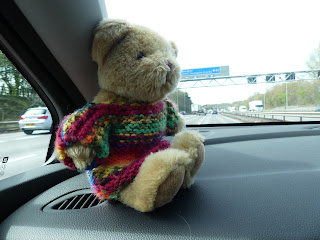 The tree I was watching last year from the caravan. 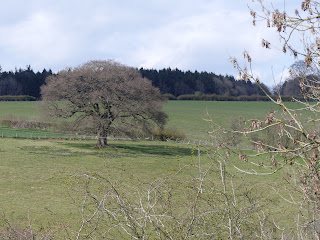 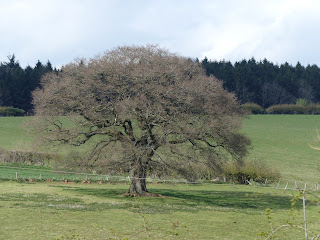 Timothy glad to be back! 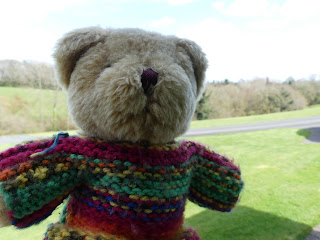 B took some cuttings from plants in the garden at home to put in the small garden area in Herefordshire. 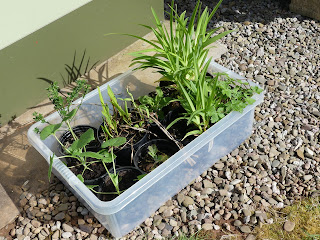 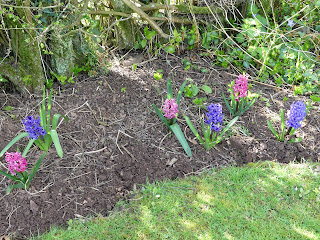 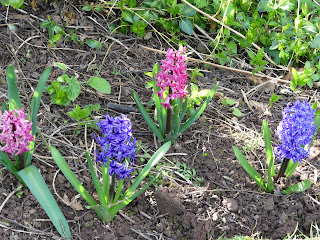 Bird feeders filled.  We didn't see as many birds as last Autumn and no Nuthatch but there are pheasants around. We have some trail cam footage which I will try and put on here if I can work out how! On Friday morning B saw a Tree Creeper and Willow/Chiff nearby. 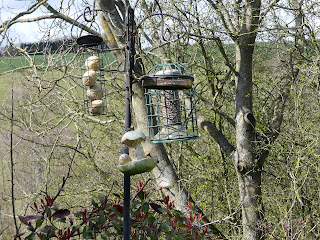 I found this little plant growing by the caravan in a crack between paving slabs. I tried to identify without success so put it on twitter during #wildflowerhourid.  It appears it is New Zealand Bittercress Cardamine corymbosa. A non native and  horticultural contaminant! 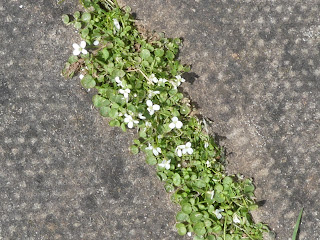 On Wednesday afternoon we returned to Queenswood Country Park and Arboretum which we visited last autumn.  It was once part of a huge oak wood that stretched all the way to the Welsh Borders and into Wales.  It consists of 123 acres of ancient native woodland which has been designated a Site of Special Scientific Interest (SSSI).  It is managed by Herefordshire Wildlife Trust in association with Leaf Sustainable Development.  There is also an arboretum with over 1200 species of rare and exotic plants from around the world. 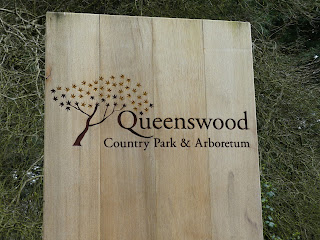 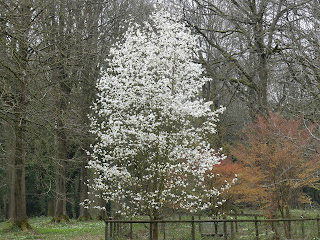 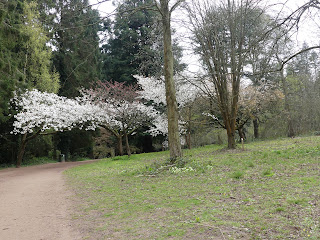 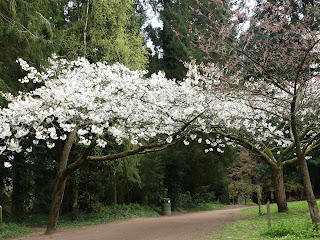 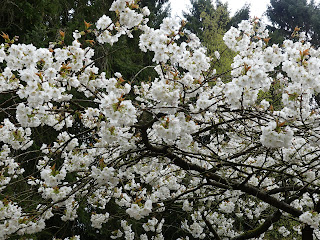 It was a joy to see so many wild flowers - there were Primroses and Wood Anemones galore plus Lady's Smock or Cuckoo Flower, Dog's Mercury, Lesser Celandine and Opposite Leaved Golden Saxifrage. 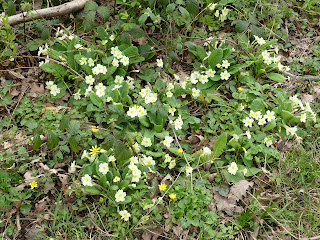 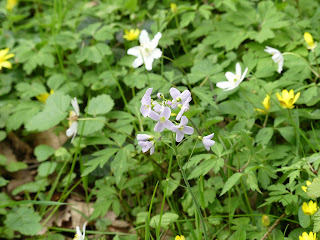 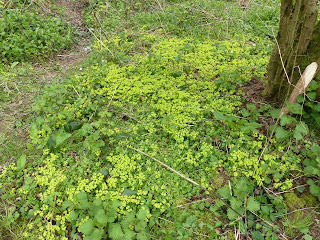 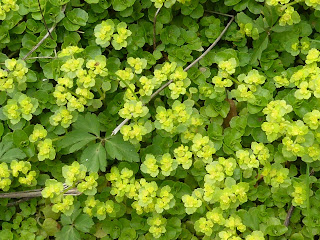 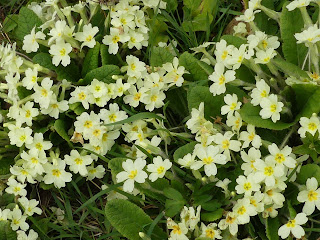 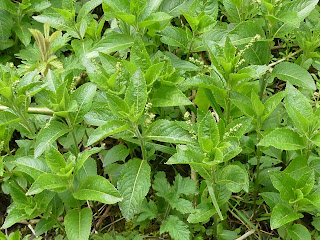 We followed the Gruffalo Trail again but in a different direction this time.  It was quite busy there as it is still the school Easter holidays but there are so many paths and trails it is easy to keep away from people. 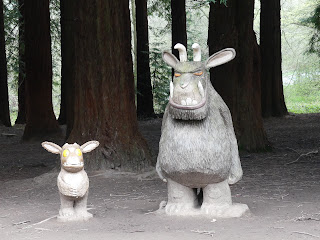 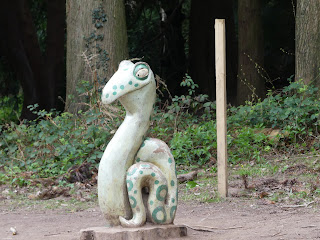 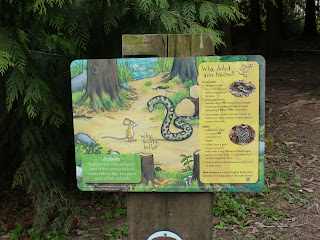 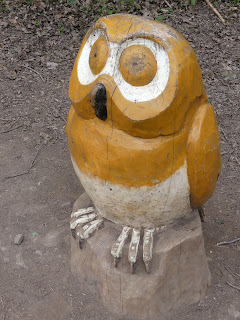 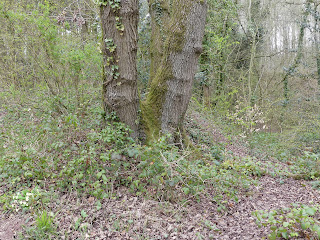 Photos taken by me with the Panasonic Lumix FZ330 bridge camera.

So glad you managed a little trip away, especially as your first season of the caravan was cut short. Hopefully, you can begin again now with the tree! At least you got there in time to see your hyacinths too. What will you do about the NZ bittercress? Is there advice to destroy it, or can it be left alone? It looks pretty, especially between the cracks. Timothy looks happy enough from his vantage point while travelling along. Good to get a grocery click and collect so close by too, very useful. Looking forward to more pictures.

Glad you were able to get back to your caravan, albeit belatedly. I have noted down the Arboretum as a place to explore. We were looking at houses around the Bodenham area but prices kept going up or they were too small or on a too-busy road.

Lovely photos and I bet you enjoyed your break.

Rustic Pumpkin - Thanks so much. They are staying open again this year in December as well to compensate but to be honest even though we have central heating caravan gets very cold overnight when temps low!! I was pleased to see the hyacinths still in flower although the cyclamen also planted seem to havae disappeared. I think it would be best to pull the NZ bittercress out if I can. Otherwise OH will appear with weed killer and I hate him using that vile stuff. Was pleasantly surprised at how efficient click and collect was tbh - no worse than a delivery in fact in some ways better as some of those delivery drivers do come close up to you and not always wearing masks!

Bovey Belle - Thank you. Yes it is nice there but weekends probably best avoided I would think and school holidays! The reserve at Bodenham lakes is I thought better. I like Bodenham too - lovely village. Yes it was good to get away for a few days and be in the countryside with nice views.

How lovely to be able to get back to your caravan and enjoy some different views. Timothy looks as if he is enjoying his outing after a winter at home. Great to be able to see the things you did in the garden last year and to take some more plants too. Morrisons sounds quick and efficient and the gardens look wonderful, I bet it was fun following the Gruffalo trail, we followed one a couple of years ago on Cannock Chase. The blossoms look lovely and I love the Wood Anemones - one of my favourites:)

Rosie - Thank you. It was good to go back - its been a long Winter!! The trail on Cannock Chase sounds good - I haven't been there for years! I love Wood Anemones too - so pretty and delicate. I don't think you can beat Spring wild flowers.

Looks so lovely with the blossom out on the trees and all the wildflowers, so glad you got to go back. Hopefully this year you can spend some long weeks there.
Amanda xx

Amanda Peters - Thanks so much. It is nice there. Yes really do need to start to spend longer periods here. 3 nights not enough time.

How liberating for you to be able to stay in your caravan again and enjoy some adventures whilst you were there.

Hello Timothy, I hope you enjoyed the adventure.

Cherry Pie - Thank you - yes it was good to escape to the countryside and Timothy enjoyed immensely!

Brilliant to get back to the caravan! Forgot to ask on my comment on your next trip about your hand painted nature box. Did you paint it? It looks lovely with the feathers. I forgot to view it large though!!

I don’t know Opposite Leaved Saxifrage but think I’ve guessed which one it is, and as I don’t know Dogs Mercury either, I’m presuming that is the last one?

Brilliant to get back to the caravan! Forgot to ask on my comment on your next trip about your hand painted nature box. Did you paint it? It looks lovely with the feathers. I forgot to view it large though!!

I don’t know Opposite Leaved Saxifrage but think I’ve guessed which one it is, and as I don’t know Dogs Mercury either, I’m presuming that is the last one?

Millymollymandy - Thanks so much No to painting the box I can't paint for toffee although OH is good. The box comes from a lady who does lovely handpainted stuff - she calls herself "At the Farmhouse" and you can order from website. She is a lovely person. www.atthefarmhouse.co.uk.

There are two saxifrages - hope I got right one. Yes Dog's mercury bottom flower one after primrose.