During Heritage Week D and I decided to visit Bagot's Castle, Baginton, near Coventry.  D finished work at lunchtime Friday so we went in the afternoon deciding it would be quieter than at the weekend! 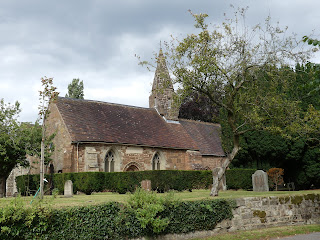 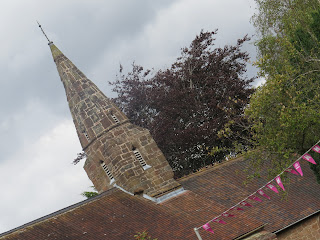 When a volunteer saw me taking pictures of the church he mentioned there was a lady inside getting it ready for the weekend opening and she wouldn't mind me looking around. Of course I would have loved to have done so but we had left home later than planned, got lost!, and Bagot's Castle was closing at 4.00 so I decided I just didn't have the time which is a shame.

The Bagot's Castle site has been occupied for centuries.  A nearby quarry used in the 1930's and 1940's revealed archaeological finds providing evidence of human activity in the area long before the Medieval perod.  Finds included Mesolithic and Neolithic flintwork and Iron Age and Roman pottery.

A motte and bailey castle was built on the site c 1100-1135 probably by a Geoffrey Savage.

We'd been give a map of the site and followed a circular walk showing the main points of interest.

A long deserted medieval village extended from the churchyard west to the castle. The village probably originated in the Anglo Saxon period and the Domesday Book of 1086 records 15 households. During the later Middle Ages,following disuse of the castle, the village was depopulated and properties were abandoned. Today the surviving shallow earthwork mounds show where the medieval houses were built.  Unfortunately it was difficult to get a photo to show this! 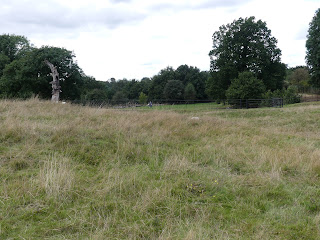 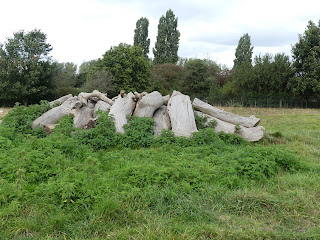 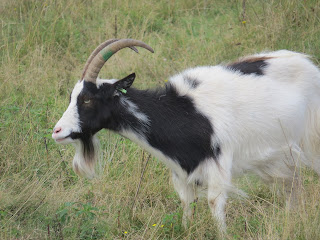 Sir William Bagot purchased the site around 1381 and in 1387 constructed a stone castle on a natural escarpment overlooking the River Sowe.  It is believed the castle was three storeys high with a kitchen and store at ground level, a reception and banqueting hall on the first floor and other accommodation on the second.  The remains of a turreted stair remain which probably linked all three levels.  The roof space would have had areas and probably watch towers in each corner from which the surrounding countryside could be watched.  It is believed a moat surrounded the castle.

Today the south ditch survives and the ruins are of a tower house built by Sir William Bagot in the 1380's and 1390's.  It would orginally have been four storeys high and would have been entered from the east via a drawbridge over the ditch. All that remains today is the basement which contained five rooms. 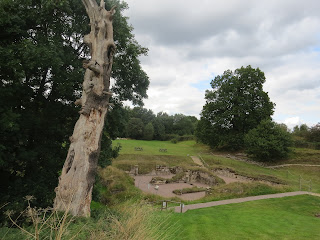 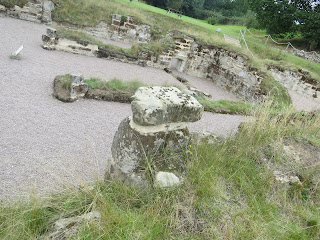 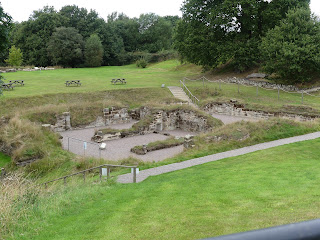 Sir William Bagot was a favourite of King Richard II and an important political figure.  It is recorded that the king stayed  at Baginton in 1398 before a proposed duel between Henry Bolingbroke (later King Henry IV) and Thomas Mowbray of Gosford Green.  The castle was also used as a prison in 1403 for the Duke of Northumberland after the Battle of Shrewsbury.  Bagot died in 1407 and is buried with his wife Lady Margaret in the church pictured at the top of the post where there is a monumental brass commemorating them (I knew I should have gone in the church!!!). 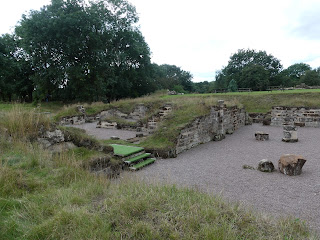 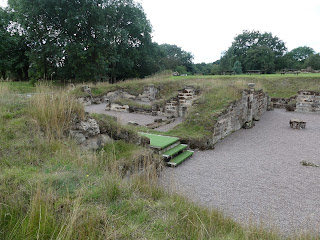 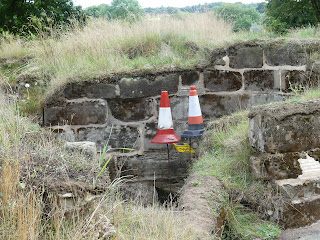 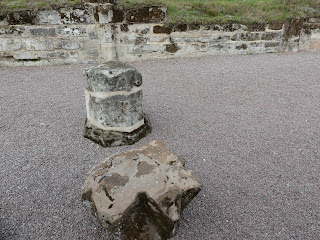 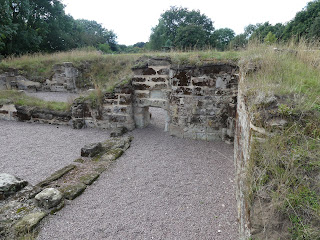 The Tower House was excavated in the 1930's by a team under the supervision of the Coventry archaeologist J H Edwards.  Many medieval finds were made, for example, pottery, glass and metalwork.  Most of these had been thrown in the ditch but in the buildings over 2000 green and yellow tiles were found. 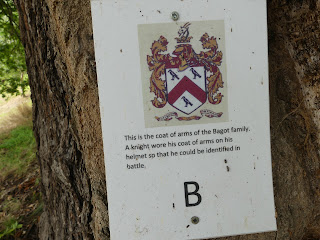 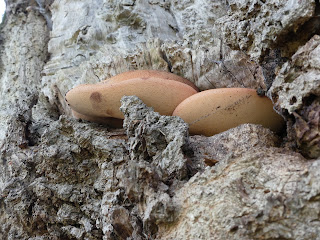 The castle was sold in 1417 to  Richard de Beauchamp, the 13th Earl of Warwick.  He had many other residences and it is not known how many times he visited Bagot's Castle.  In 1471 the castle was in the hands of the Collegiate Church of St Mary's, Warwick, and it appears that the castle was then not used.

In 1540 the castle was described as being "desolate" and in 1544 it was bought by Francis Goodyers.  Again he possessed many other properties and it is likely he used stone from Bagot's castle to renovate some of them.  Thereafter the castle became a ruin.  On his death the castle was inherited by his son Henry who had a rather extravagant lifestyle and to raise money he sold the castle and estate to Sir William Bromley in 1618.  The Bromley family had moved to the area and had built the nearby Baginton Hall. The hall suffered a massive fire and was rebuilt and at the same time the site of the castle was landscaped and turned into a park and pleasure ground.

The family built a small gazebo or banqueting site overlooking the river (please see photos below of the ruins of this).  Old photos show it was originally two storey with a tiled floor. 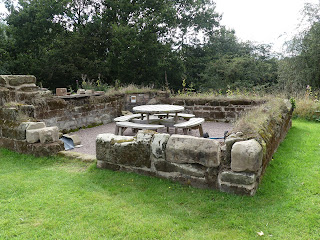 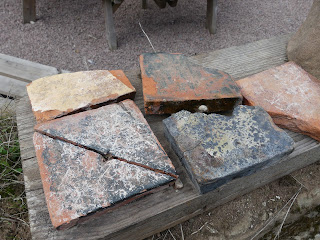 In the 19th century the second Baginton Hall was also destroyed by fire and not rebuilt.  The castle site and the gazebo fell into disuse and vegetation began to take over the site.  In the 20th century the Coventry Boy Scouts Association purchased the site with the idea of building an adventure park. These plans never came to pass (imho thank goodness!) and the site was sold to Finham Golf Club.

The present owner purchased the castle and, with the help of donations and sponsorship, began to clear the site of rubbish and trees and plants.  The site was eventually opened to the public. 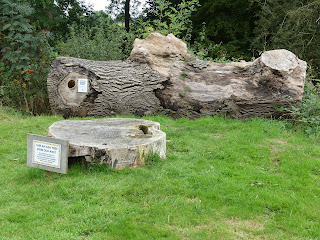 I should have taken Timothy! 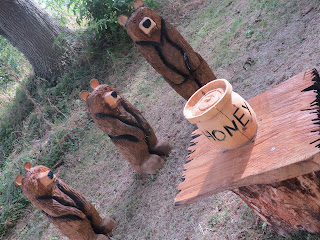 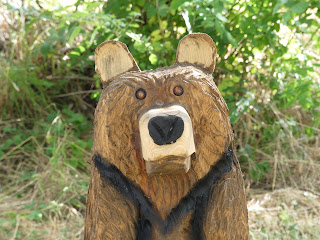 We followed the trail a short distance along the banks of the River Sowe. 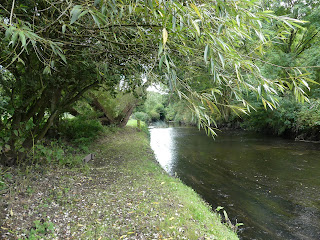 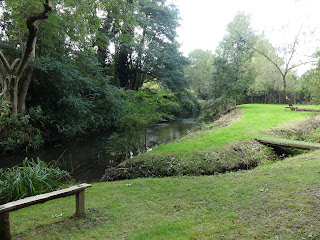 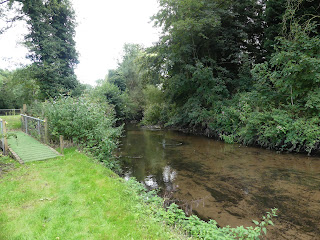 The trail then passes three fishponds fed by a spring further up the slope.  They would have belonged to Baginton Hall and are first recorded on a tithe map of 1841 and were still being used in 1886.  However, it is likely that were constructed earlier in the Medieval period to provide fresh fish for the castle residents and an eel trap is still in place. The ponds have recently been restored to benefit nature. 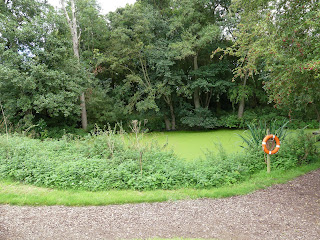 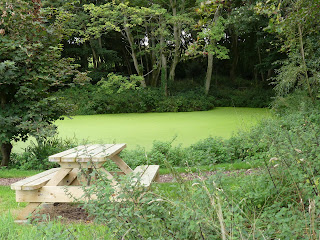 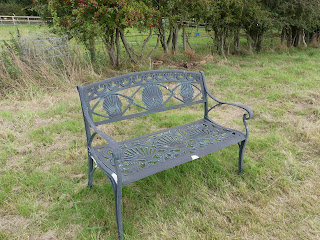 It was a really interesting afternoon out and D and I really enjoyed it. I just wish we had allowed more time as there was a exhibition in the Visitor Centre which we didn't have time to see.

Photos marked with *D taken by my son with the Canon SX50 bridge camera. Rest of pictures taken by me (one handed as I was trying to hold a laminated map of the route in the other hand!) with the Panasonic Lumix FZ330 bridge camera.

Reference : History of Bagot's Castle on their website and various information boards as we walked round.

Love the ruins and the photos by the river.

The trouble with visiting such sites is that there's never enough time! At least you know now so maybe next time take a picnic. What a pretty little church it is indeed and such a shame you were pressed for time. The riverbank walk looks calm and peaceful. Poor Timothy, I'm sure he'd have loved a visit to his kin!

Niki - Thanks so much.

Rustic Pumpkin - Thanks so much. We should have allowed more time and getting lost didn't help! I would certainly go again and nearby too is Lunt Fort (Roman) sometimes also open for Heritage Week. I am beginning to think Timothy may need to start coming along to outdoor places :)

So much of interest. It sounds as if you could have spent a whole day there. I hope you are able to go back and see inside the church. There are always so many places to visit on the Heritage weekends Timothy would have loved those bears. Take care:)

Rosie - Thank you. A lot of churches not normally open seem to do so in Heritage Week. Bagot Castle is certainly open weekends in the summer so easy to go back and I will check on Lunt Fort to see if we could do both. Timothy would have had his nose in the pot of honey :) Take care too.

Oh dear, I saw you casually throwing in that you got lost, how unusual :D It looks like a good place to explore and a great job on clearing it up for the public.

Pam - Thanks so much and lol! re: getting lost. I had drawn my usual little map from google maps and then missed the left turn! Sat nav came to rescue yet again :) Yes the site immaculate.

This looks a really interesting place to visit. I had not heard of it before.

Cherry Pie - Thank you. Despite living in the same area for 68 years it is good to find new places to visit!