Autumn Colour in the Garden

Cosmos is still flowering in our garden providing nectar for the occasional pollinator that passes by. 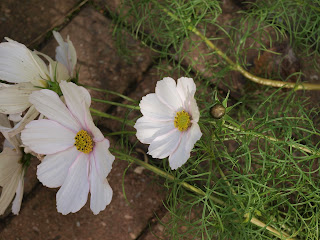 I bought this Rudbeckia from a NT property earlier this year - can't for the life of me remember which one - to begin replacing the half dozen or so I seem to have lost in the garden. My favourite pink Cone flower has also disappeared along with the chocolate scabious :( Sadly, I think B often decides to "weed" the herbaceous border just as the plants are starting to grow and some of the perennials come out with the unwanted ones :( 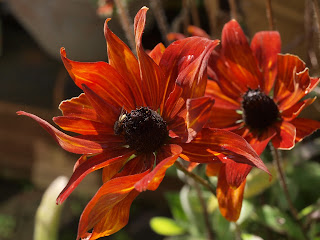 Ragwort is still flowering in the "no mow zone" of the main lawn. 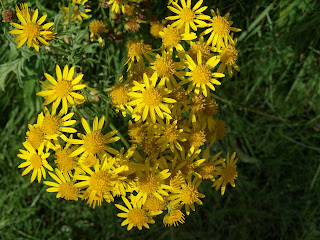 Michaelmas Daisies - one of my favourites although I seem to have also lost the deep pink one we had :( 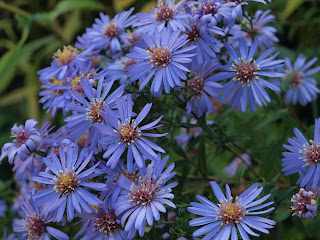 Whitebeam fallen leaves and berries. I must try and collect some of the latter and try and get them to germinate this year in case we do eventually decide to move. The whitebeam appeared as a self-seeded sapling not long after we moved in and is one feature of the garden I would really miss if we left so it would be good to take a young tree with us. 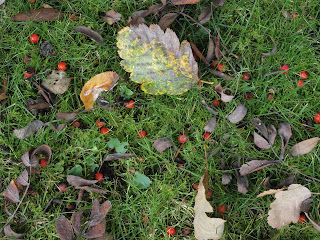 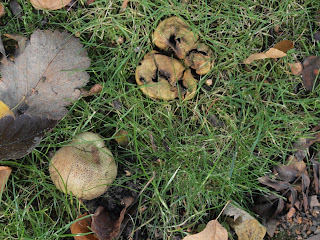 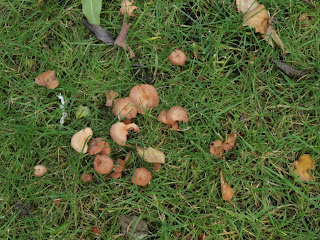 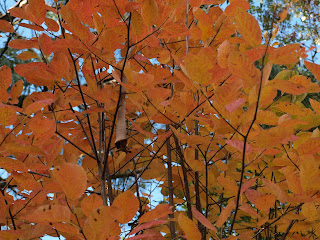 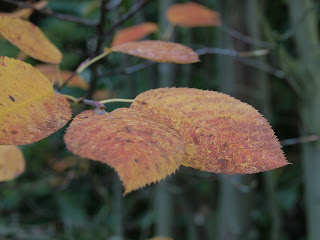 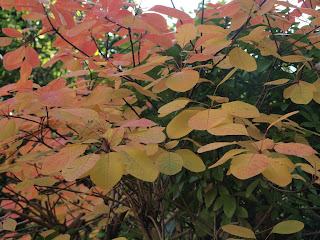 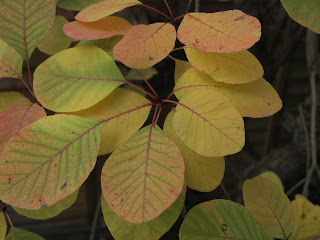 Wild Carrot Seedhead near the wildflower meadow. B has now cut the meadow - I think we might get a better idea next year if the sowing of copious Yellow Rattle plants has curbed the dreaded couch grass. There didn't seem to be an increase in wild flowers this year but couch grass was certainly less vigorous. 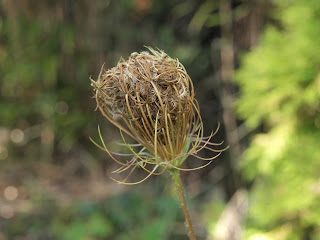 Ice Plant - again these don't seem to have flowered as well as usual this year. 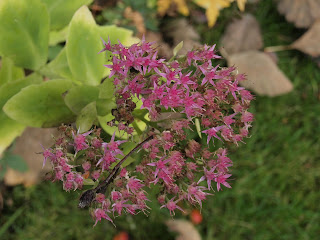 Lots of ivy flowers for pollinators 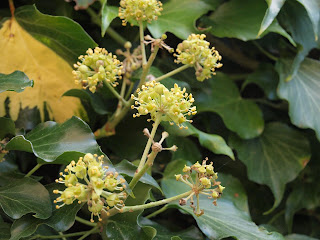 I can sympathise with the over enthusiastic pruning and weeding. I had help earlier in the year to get my garden into shape. My helpers got carried away in a few places...

I still have a few flowers, must get out in the garden and have a tidy up. Notice some of the pots are really dry ! might have to water...
Love the Michaelmas Daisies plant, mum and dad had it at home and I remember it been covered in insects later on in the year, have looked for some to go in the garden . Now I know what it's called I can find some for next year.
The yellow leaves of your tree look lovely, have grown 5 trees in tubs from seed, from the Maple tree. Leaves look stunning. On the way to the park there is a Sugar Maple.. the most beautiful Yellow, would like to grow this one too. Wild carrot Seedheads, are they quite easy to grow ?
Amanda xx

Cherry Pie - Many thanks. Not good when someone is over enthusiastic :( OH does like giving things a "haircut" too - finally realised why my hawthorn never flowers :(

Amanda Peters - Thanks so much Amanda. The Michaelmas Daisies (a type of aster I think) often attract Red Admirals at this time of year - lovely colours at this time of year :) Sugar Maple sounds superb - we have a small acer here which I didn't get a picture of but it looks beautiful. Wild Carrot came in a pack of wild flower seeds and seems fairly easy to grow - around half a dozen or more come up each year. Lovely white umbellifer type flowers which insects love and the seedheads, as you can see, are pretty :)

i enjoyed this post with all the autumnal colours and flowers

A lovely look around your autumn garden. I've lost things here due to over-enthusiastic tidying up, too. I'm much more vigilant now! That is interesting about the yellow rattle, I've sowed some this autumn and hope it has some results against the grass. My ice plants haven't done as well this year as last year as well.

Margaret Adamson - Thanks very much - so pleased you enjoyed :)

You have some lovely colour and seasonal plants in your garden. I've noticed that Cosmos seems to be lasting well this year. The Rudbekias are a gorgeous colour. Our pink echinacias haven't done well at all this year either and we seem to have lost all our japanese anemones I think because of the garden flood we had in the summer and the general dampness of the soil:)

Wendy - Thanks so much. It is so annoying to lose plants but we leave all the seedheads in the perennial border over winter so OH doesn't remove them (and tidies up at same time) in Spring. Good Luck with the yellow rattle - looking forward to hearing how it all progresses. It seems a well tested method of helping to control grass so all being well we should both see improvements! Interesting to hear your ice plants haven't done well this year either - they are usually covered in flowers!

Rosie - thanks very much. I suspect the first frost will finish off the Cosmos but there are still providing lots of colour at the moment :) I remember reading of the awful incident of your garden flooding - so sorry to read of your loss of plants. I would imagine some species are more tolerant than others of wetness.

Have you had a frost since you posted this? We suddenly had a harsh frost and the dahlias and nasturtiums are history now, and the leaves suddenly started pouring down from a number of trees! Still plenty of colour about. I'm quite surprised by the ragwort still flowering and I hope your wildflower meadow does better next year. I imagine they take quite a time to get really established. Sorry I have not been looking in - I see you had a holiday the same time as I was away! Hope you had a lovely time and I'll try to take a peek at the posts but I won't be commenting on them all. I can't possibly catch up! Take care and see you on Twitter! :-)

Millymollymandy Thanks so much for the comment Mandy. I know you were away for weeks so please please don't worry about commenting. Yes, we had a lovely time thanks although it was a bit too hot for me!!!

Not a proper frost yet as such although temps dropped just above freezing and car windows have iced up a bit a couple of times but Cosmos, Michaelmas Daisies and Nasturtiums are still flowering!! Looks colder over night this weekend though so that may sadly, finish them off! Leaves are falling fast though! B has had an attempt at yanking out some of the couch grass in wildflower meadow (huge pile of roots has formed!) and has re-seeded some but he didn't use the usual mix :( This one has some meadow grasses, some wildflowers and some garden perennials in. Goodness only knows what will come up next year but hope the yellow rattle survives all the attention!!

Take care too and speak to you soon via Twitter :)