Last weekend I took part in Garden Bioblitz 2014. The event took place on Saturday 31st May and Sunday 1st June and the idea is to pick 24 hours over the weekend and list all the species that have colonised or arrived in your garden of their own accord. If you have problems with identifying a species or desire confirmation you can visit i-spot and post a photo. I found this site very useful and helpful. Finally, you need to visit i-record to submit the species you have seen adding any photos you have taken. Its great fun to take part and it really does increase your knowledge of biodiversity in your garden. In addition, the records are stored at the Biological Records Centre and can help local record centres, conservation organisations, natural history societies and local government make decisions about conservation projects, land management and planning permission.

I started my 24 hour bioblitz at 9.00 p.m. on the Saturday and here's a list and some photos (sorry many are poor record shots) of the species seen. I tended to take quick photos of species where I wasn't sure of the identification or where I thought my records might be queried. 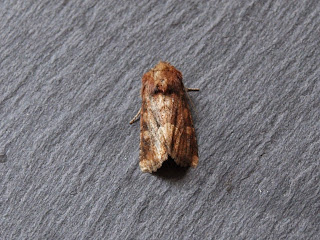 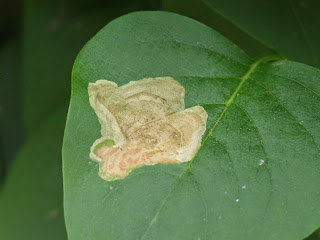 Butterflies seen in the garden during the day were

Common/Smooth Newt still lots of these in the pond and I found lots of young frogs in the wildflower meadow. 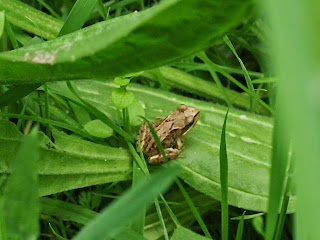 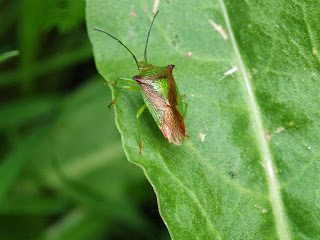 A photo of the frothy, bubbly "cuckoo-spit" which the froghopper nymphs create to protect themselves. Adult Froghoppers are incredible jumpers and can leap 70cm into the air! 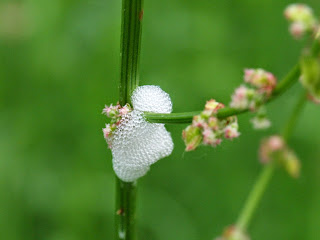 Harlequin Ladybird - this individual was fished out of the pond 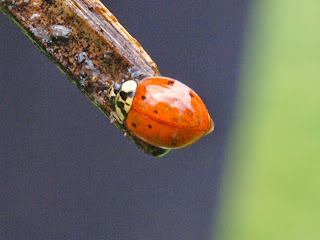 D helped me for part of the time and he spotted a yellow native ladybird hiding amongst peony leaves. Unfortunately it flew off before the spots could be counted!


We had great fun at one point spreading a white sheet on the floor in the wooded area at the top of the garden and shaking the branches. Several spiders and this weevil appeared on the sheet. 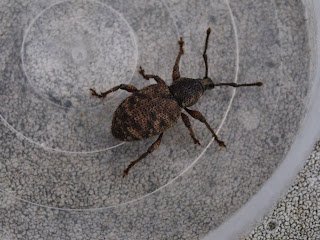 Thanks to i-spot who identified this as a Red Mason Bee (Osmia bicornis). If you click on the photo to enlarge it you might be able to make out the horns on its face! 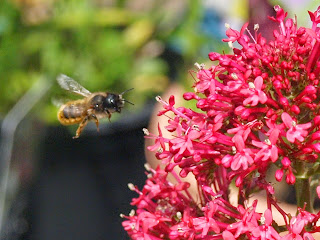 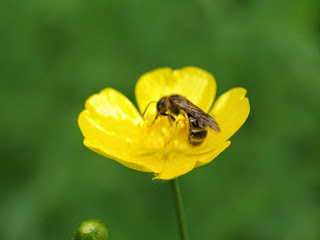 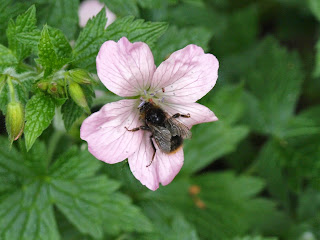 I had to be very careful what I counted here as over the years we have planted a lot of native trees, shrubs and wildflowers which I have excluded. 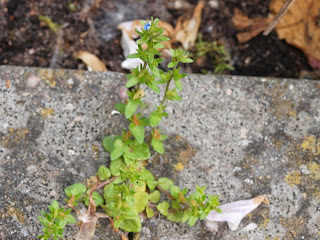 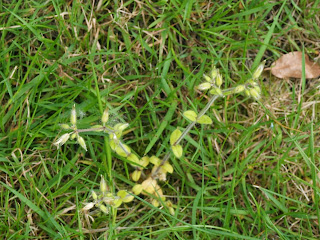 Corydalis
Bramble
Common Netttle
Groundsel
Dock
Alkanet
Ribwort Plantain (found this plant in the front lawn - well away from the wildflower meadow at the top of the back garden so I have counted this one :)
Wood Avens 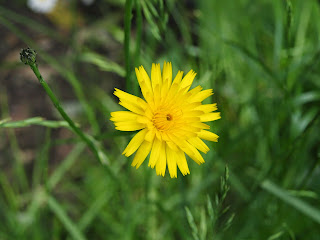 Trees which have self-seeded 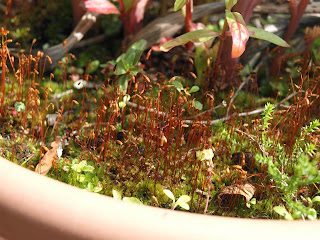 I found this grasshopper on the front lawn and its been identified on i-spot as an Acrididae grasshopper (Probably Common Green - its a young one who hasn't yet developed its adult wings. 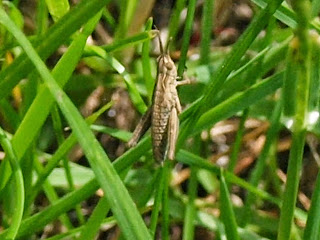 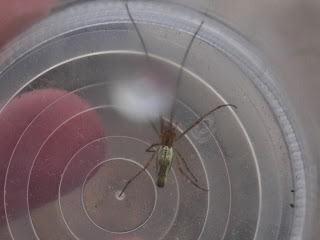 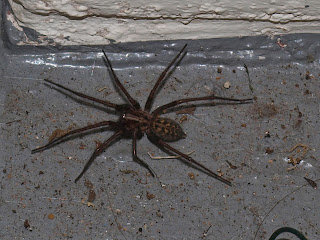 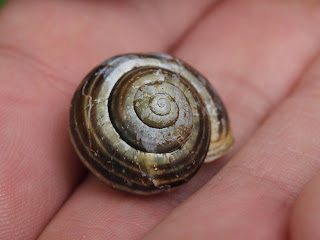 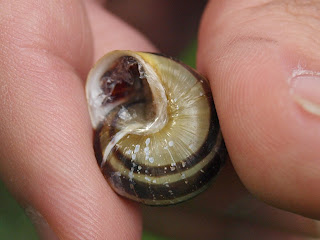 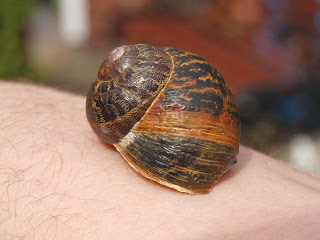 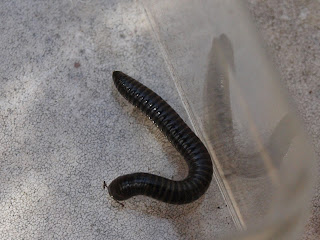 Centipede - unable to get this to species level buts its a Cryptops sp. 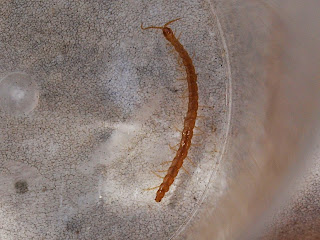 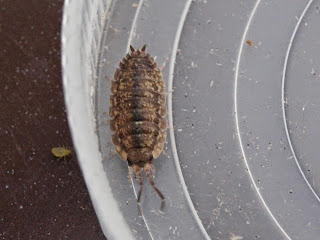 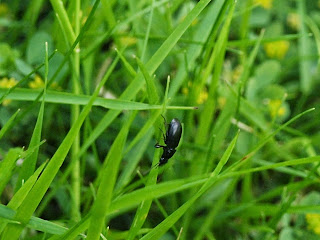 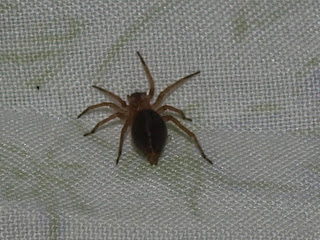 Unfortunately, I ran out of time so pond-dipping and dissecting the log pile will have to wait until another day. I had set myself a target of 50 species so I was really pleased to reach just over 70. I've also added nearly 20 species to my 365 garden challenge list :)


Many thanks to Duncan for persuading me to take part and to experts at i-spot for confirming or identifying species and to the team at Garden Bioblitz.


Apologies in advance for any typing errors especially in the scientific names. I'm typing this in a bit of a rush as the family has gone out for an hour and, instead of doing the ironing, I am "skiving" off yet again on the internet! :)

Really interesting post and fantastic to find so many things in a short space of time- you must be thrilled. I've been counting everything in the garden (including plants that we've added) and have been amazed at just how much the garden is supporting. Way more than I thought, which is great :-)

Countryside Tales Thanks - yes I was pleased to so many species :) Its amazing the amount of wildlife you can find in a garden. The more you plant and add wildlife friendly features the more moves in :)

Lots of interesting finds,just realised I did not record self seeding trees,Leaf miners and moss.
Have you up loaded your findings? How are you finding this ? You haven't mentioned Slugs ?I'm having trouble recording these on Irecord.They also will not except some of the bees, even though I have both common and scientific name, maybe some bees look to similar?
Let me know how you got on.
Amanda xx

Amanda Peters - Thanks Amanda. There were a few things I didn't get round to - more mosses, lichens and liverworts - id headache :( I found one small slug under a flower pot but it curled up and when I went back later to check and take photo it had disappeared :( The whole exercise though has got me far more interested in insects in general so I will carry on trying to id more.

Yes, I have uploaded most of my findings. I too had problems with some species eg Black Garden Ant, White-lipped Snail and both spiders plus froghopper. Like you I tried common and scientific names. It does seem a bit fussy for example Heart and Dart it won't accept but it will Heart & Dart!!! The strange thing was a day later I went back and tried again and managed to input some of them. But there are still some it won't accept. I'm also finding it difficult to put it in records where I haven't got a species just the genus although strangely it did accept the centipede. Very strange. Best of luck and please let me know how you get on. I will try again tomorrow!!

Thanks for that I don't feel as bad now, will have a look at mine to day.
As for Slugs you can have some of mine ! On a night you would not believe how many there is, we are talking hundreds and hundreds the whole floor moves :(
Amanda xx

Amanda Peters - Thanks Amanda - good luck with yours and I'll re-check my list on there today and try again with the few it won't register. By the way I haven't put photos on there for every species!

Thanks for offer of slugs!!!! :) Ours come out at night and when wet and make a beeline for young plants :( I don't think we have as many as you though!! I think I've identified one or two species this year and have another one I'm working on.

I wonder if we have something like that here in the US. What a wonderful way to get out and challenge with ID. I'd be okay with plants, animals,lizards et al, birds and a few insects......but I'd have a challenge with the moths and tiny tiny bugs:) Congrats on all your finds.

Chris Rohrer - Thanks so much Chris. There could well be something similar in the US - it really is great fun to take part and I learned a lot. Must admit I found the tiny bugs and flies a huge challenge!!!