A Few Flowers from the Garden, a Conopid Fly and Emperor Moth Caterpillar Update 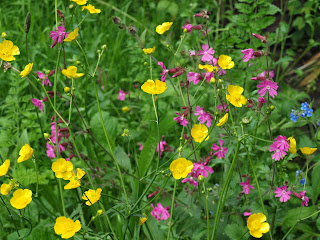 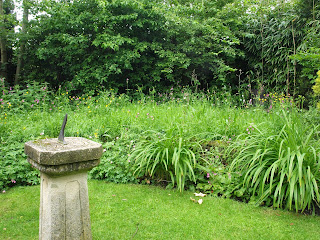 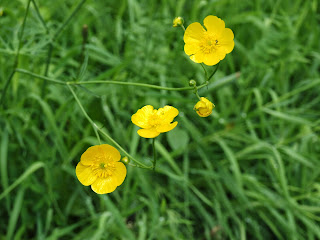 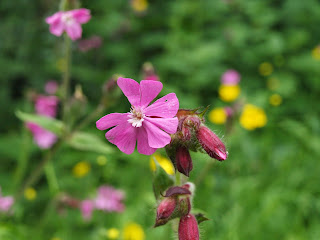 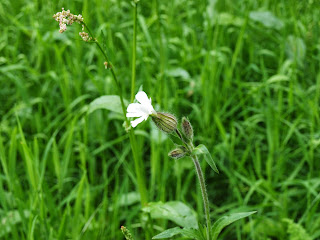 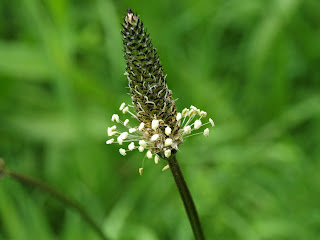 Elsewhere in the garden geums are finally starting to flower in the herbaceous border. 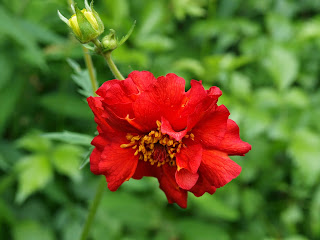 Valerian - this is very popular with Silver y moths, bees and hoverflies. Hummingbird Hawkmoths apparently love these flowers too - I live in hope!! 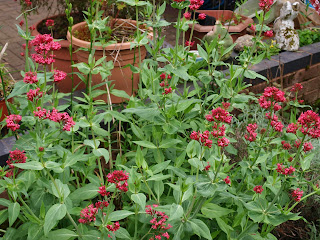 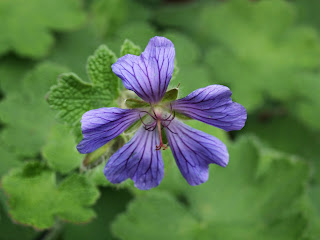 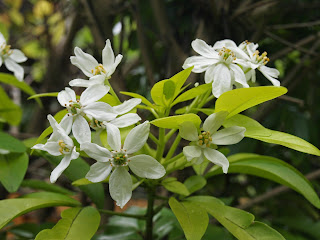 Clematis has put on a good show this year. 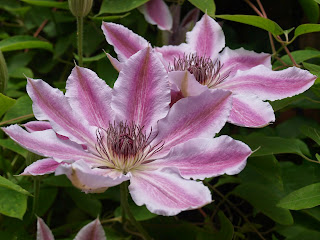 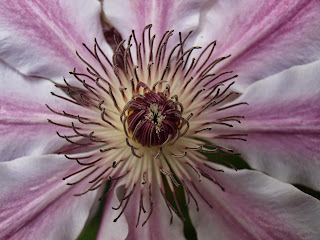 A Hawthorn Shieldbug found on nettles when I was looking for caterpillars. 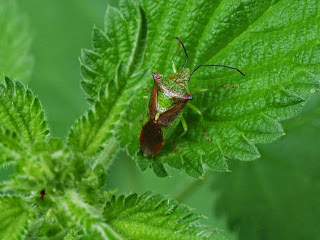 I spotted this rather unusual fly yesterday on valerian leaves. I couldn't find it in any of my insect books so I posted a photo on i-spot (I can highly recommend this website for help with identifying or clarifying ids of species) and very shortly I got an answer identifying it as a parasitic conopid fly - Sicus ferrugineus

The larvae are endoparasites of bumble bees of the genus Bombus - they pupate and then overwinter in their victims! Unfortunately the fly was very close to the Tree Bumble Bee (Bombus hypnorum) nest in the roof! :(

Tree Bumble Bee - photos taken before I released the two individuals from the garage in 2012 when I first saw them in the garden. 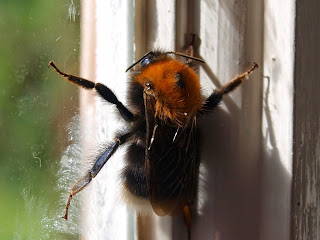 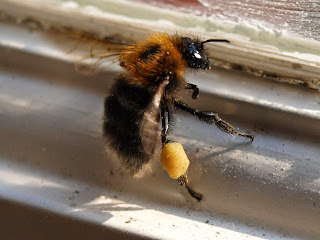 Tree Bumble bees only appeared in the UK in 2001 - they were first found in Wiltshire presumably arriving from the continent. The species has a natural distribution in mainland Europe and through Asia and even up to the Arctic circle. It has spread rapidly over England and is also now found in Wales although it hasn't yet been recorded in Scotland. It is believed its rapid colonisation is most likely due to its habit of nesting in bird boxes.

Finally, a photo of my Emperor Moth caterpillars now three weeks old. They never seem to stop munching on hawthorn and bramble leaves and are growing rapidly. 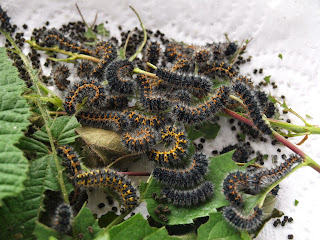 Last weekend I did a bioblitz of the garden - I'll do a post in a few days on the species I found. There are still a few insects I am trying to get down to species level!
Posted by Ragged Robin at 15:41

I'm having a senior moment and can't remember whether I've already left you a comment- so if there are two please delete one!

Lovely post, your garden is looking so full of interesting things. It's a good news story, Tree Bees isn't it? Particularly given today's stories about the NFU brow-beating the Govt into reducing their green policies and in Europe too. When will these people learn that if we don't look after the wild things there won't be much left for us anyway? :-( (sorry, didn't mean to rant! lovely post which I enjoyed x)

A lovely selection of wild flowers in your garden.

Countryside Tales - Thanks so much. Only one comment as far as I can see. I quite frequently manage to send 2 to blogs as I sometimes have trouble getting one through and when I send second it appears first had already arrived!! I seem to have ever increasing senior moments :(

Yes, I saw the feature about Tree Bumbles just after I'd done the post. Apparently they have now reached South Scotland too!

Oh don't worry about ranting - I do it constantly about NFU, DEFRA and Natural England. I am constantly jumping up and down with frustration and anger. Read today how DEFRA had turned down chance of giving more funding to agro-forestry :( And I daren't even think how much I will rant when badger slaughters re-commence in Gloucestershire and Somerset :( And as for the research into gassing :( Oh dear now I am going on and on. Better stop!!!

Dartford Warbler Thanks so much. I've now put the caterpillars into 2 containers - they seem to grow by the minute. Will have to try and find a much bigger "cage" for them! I can see I will have to take them on holiday.

A lot of my white campion seed pods have a caterpillar in them,seem to eat the seeds. What could they be?
6310

Maurice - Thank you so much for leaving a comment. I think the caterpillars in the white campion seed pods are probably those of the Campion Moth - they are particularly active at dusk.

Cabinet of Curiosities (please see my blog list on the right) did a great post on these recently. Just scroll down a few posts.