A Very Brief Trip to Herefordshire

We managed to get away to Herefordshire for a couple of nights last week  although we had to come back early due to  a family "crisis" so we didn't actually have chance to go out anywhere. So just a few photos from around the site and caravan.

D made me this hop kiln model which is rather sweet. 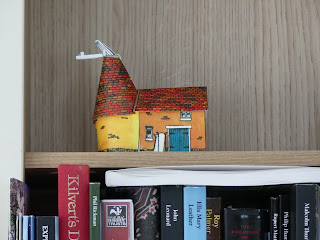 Herefordshire oak - perhaps the slightest hint of a change of colour in the leaves? 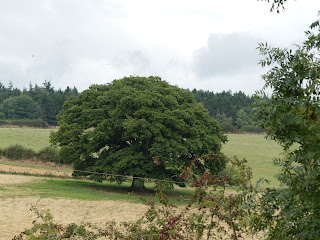 Hawthorn berries galore - last autumn we used to see redwings and fieldfares feasting on them. 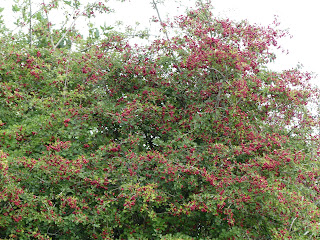 The rose is still flowering. 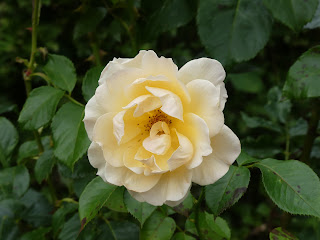 Hollyhock about to flower. 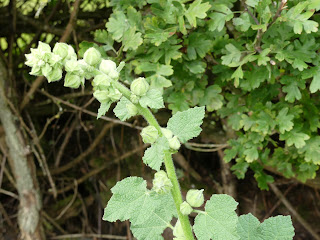 View from the dining table in the kitchen - there are usually sheep in this field but now we have cows :) We heard a tawny owl or two hooting from that direction one night. 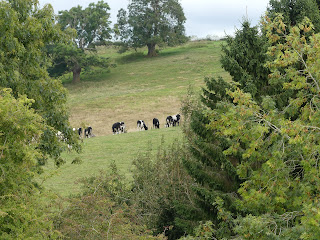 Cooking apples picked from the little apple tree. There were 42 - far more than last year. Two apple crumbles made and a Dorset Apple Cake. Next week I am making an Apple and Stilton Soup and B fancies making an apple pie. 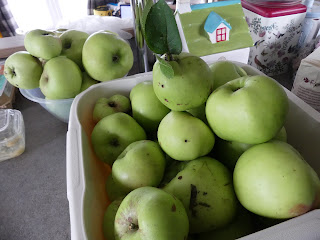 I do hope we can go back to Herefordshire soon as the nightmare re: next door continues. I think by the time they have finished the demolition work only the exterior walls of the house and supporting walls will remain.  The workmen seem to have no knowledge of the party wall agreement as late last week they took the roof and tiles off the rear extension and debris was raining down on our greenhouse roof. They are not supposed to do work like that until they have protected the greenhouse!   We tried to tell them to stop but they just shrugged and carried on - one of them didn't seem to understand English. B rang the house owner and got nowhere just fobbed off as usual. I think we may have to contact the surveyor who drew up the Party Wall Agreement although it is supposed to be legally binding I don't think there is much you can actually do to enforce it.  Everything seems geared to helping the person who is doing the building work.

Photos taken by me with the Panasonic Lumix FZ330 bridge camera (I don't particularly rate most of my photos but if anyone wishes to use one I would be grateful of an email first (thanks).

So sorry, a trip was cut short. But at least you got to check things are alright at OFFA. Family must come first. You certainly had a good haul of apples. Hopefully your next visit will be longer and less eventful.

Well you can talk to the solicitor and get him to claim for damages if they occur. My neighbours had passed away around the time I got my plans passed and the place was rented so no problems like you. It was only after the place was sold and a couple who we did not get on with bought the place we were on edge. They sold up and we have some nice people living there now. Hereford has some nice countryside from what I see when we drive through

PS. I forgot to mention that hop kiln model is really sweet. How kind of him to make it for you. Is it paper? It's very clever.

Oh what a nightmare over the building work next door. I hope your greenhouse doesn't get damaged. It sounds like the entire house may collapse if only external walls left standing! I hope your husband can make an impression on the Surveyor that things are not being done as they should. Perhaps a stiff Solicitor's letter might be a good idea.

Glad you had a short break in Herefordshire but a pity you had to abandon plans to stay longer. I am being kept supplied with apples by my friend Pam. Glad your tree has been productive.

Rustic Pumpkin - Thanks so much. Yes we did need to check all ok there and pulled up some weeds from the gravel which had sprouted from nowhere, watered plants and picked apples. Thanks too re Hop Kiln - it was a model made from thick paper/cardboard. I also have a little church and D has a timber framed cottage. They are rather lovely and inexpensive :)

Billy Blue Eyes - Thanks so much - they are liable for any damage caused. Main problems are that they are completely gutting the house which in an adjoining semi makes it noisy and dusty for us and they just seem to think they can do what the heck they like despite party wall agreement and planning permission - they are using different plans to the ones that were approved. We are still waiting to hear from the Planning Dept and Enforcement Team on it.

Bovey Belle - Thanks so much. Greenhouse does actually have a perspex roof but they won't know that -if it had been glass it would have broken. Yes we are very worried. I know these are just the demolition crew but tbh they seem like cowboys and there is no builder's van with or without a name on it. No activity at all so far this week.

I am hoping we can go back to Herefordshire soon but have drain survey tomorrow due to the rebuilding work as we unfortunately have the manhole on our patio and next Monday OH has booked flu jabs!! Far more apples than last year but I think then there was a frost problem at the wrong time.

I am so sorry you are going through this drama and the stress it causes.

I hope you are able to sort it out to your satisfaction.

CherryPie - Thank you so much for your kind words.

Glad you were able to get away even if just for a short time. It seems to be one thing after another with all the things happening around you. I hope all will be well. I love the hop kiln. I love little buildings, I'd love to make a complete village but of course no room, I used to make playing card villages on the table when I was a child - they always had to be cleared away for tea time:) Your apples look wonderful and now you have reminded me about Dorset apple cake I will look for the recipe I use from the Cranks book although I think that is called Devon apple cake almost the same I would think. The soup sounds lovely too. Take care:)

Rosie - Thanks so much. It was good to be there even if only for 2 days! Yes I like little buildings too. I used to collect Lillput Lane but then got too many and they are now in a storage box! Enjoy your Devon Apple cake - I am sure it will be very similar to the Dorset one! Take care too and thanks again :)

What a time you continue to have, RR, over this building work. It must be so tiring. However, I'm glad you had two nights of respite in beautiful Herefordshire. I grew up in Kent, where there were wonderful oasthouses. Our Harvest Festivals were always scented with the smell of hops. Those apples are making my mouth water!

Caroline Gill - Thanks so much. Sadly this will be going on for a year at least!!!! Will try not to moan too much about it. It is tiring because I can't sleep wake up at silly o clock worrying and can't get back to sleep. I was explaining to my son that Kent oasthouses Herefordshire they are called hop kilns!! I bought a hop garland a few years back to hang along stairs at home but the trouble was bits kept falling off as people brushed past it so I had to get rid of it. Apples going down made 3 puddings and one meal so far!