I put out the moth trap again on 16th and 19th July (GMS night) and caught several new species for the year and a few totally new for the garden.

Swallow-tailed moths are absolutely beautiful and look just like butterflies. They are often attracted by house lights to windows so even without a moth trap its worth looking out for these. In fact, I trap very few - most are seen here at windows or doors. This is the first one I've seen this year. 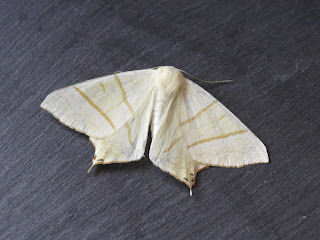 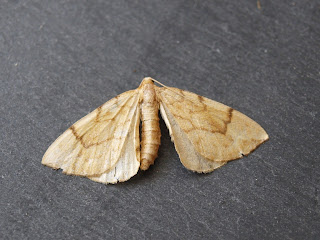 Double Square-spot) - New for the garden 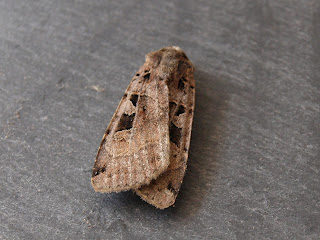 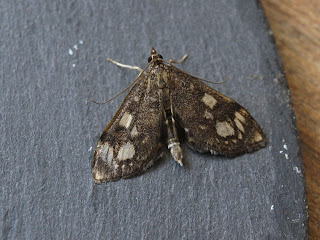 And here's a mystery lbj. To be honest it looks like one of the Flounced Rustic variants - but seems too early. Is it a variation on markings of another common species? Any help much appreciated. 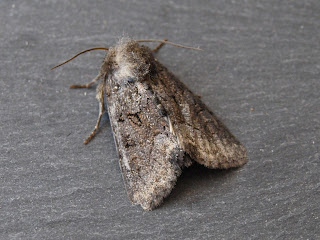 
On this photo you can see its black and white ringed legs! 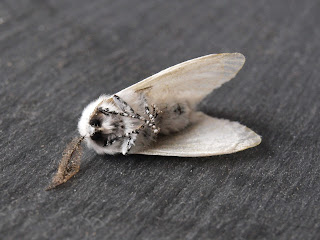 It looks very comatose in the photographs but within a few minutes of taking the photos it recovered from being put in the fridge and was whirring busily round in a moth pot.


Grey Dagger (new for the year). This species is very similar to Dark Dagger and its impossible to distinguish between the species without genitalia dissection (a route I have no wish to take!!)

Leaving moths for a while - I discovered this unusual looking "beetle" on wild carrot in the garden wildflower mini meadow. On looking through the id books I was put in a state of panic by its (slight) resemblance to a Colorado (serious agricultural pest) Beetle grub. Luckily, twitter came to the rescue again as someone had posted a photo of the same insect - its actually another unwelcome "alien" - a Harlequin Ladybird pupa.

If any of the id's in the moth photos are incorrect please feel free to let me know.

Lovely moth photos. Fancy only being identifiable by dissection of your genitals though!!!

This is very interesting because for the last couple of weeks we have been inundated with Buff Arches to the tune of 30-50 in the box each time. Could it be a regional difference I wonder?
The best I can come up with for your lbj is a faded marbled minor or marbled white spot, but I also find these ones quite tough to id with any confidence.

Bovey Belle - Thank you. You have to feel sorry for the moths. I just couldn't kill one to dissect just to get a new tick.

Countryside Tales - There will be regional differences and also differences due to nearby habitat and type of moth trap used (I suspect). Getting a bit annoyed at the minute with the skinner as it just allows so many to escape especially where perspex doesn't fit exactly!!

Thanks for help re: lbj-. Still not sure. |have hundreds of photos of unidentified worn lbj's!!!!

A great selection of moths again :-) We are getting lots of Swallowtails up here at the moment but as you say more seem to be found outside the trap rather than actually in it ! I too trapped a White Satin the other day and it's even more confusing when you have both Brown-tails and Yellow-tails in the trap at the same time (it's a good thing they have those black and white legs to tell them apart !).

The mystery moth is one of those tricky ones isn't it but I'd be inclined to agree with CT as regards Marbled Minor :-)

David Turner - Thank you :) I thought at first White Satin was a Brown-Tail/Yellow-tail - thankfully the legs clinched it as you say! Glad you have trapped White Satin too - am getting so many new species for the garden recently! Wish I had the time to trap more than about twice a week!

Thanks re: id help - Marbled Minor would be a new species for the garden! :)

Hi Well I marvel at all the experts on moths. I love to see them and I can't get over just how many varieties there are. Lovely selection. I think it was me that had that bug!!! Margaret

Margaret Adamson - Thanks so glad you are enjoying all the moths :)
You didn't did you? I had visions of men from DEFRA in protective suits using insecticide all over my organic garden!!!

Love the Barred Straw. Always a pleasure to look at moths!

A lovely selection of moths once again. I will look out for the Swallow-tailed moth if it can be seen on windows. It is beautiful.

Em Parkinson - Thanks :) I had to chase after Barred Straw as it made a beeline for the ivy as soon as I opened the trap!

Wendy - Thanks :) Good luck with searching for the Swallow-tailed - do hope you manage to see one!

Last night a moth flew in front of my face and I lost it!:) We were leaving our house and one flew right in my face. They get crazy during this high humidity. I really like the Brown-line Brown-eye. It has lovely shades on those wings.

Chris Rohrer - I would imagine some of your moths are a lot bigger than ours and it might not be a pleasant experience!! I catch far more moths when its humid. If you go out in the evening the moth trap is just covered with moths (you get covered too!!!!). I should really pot more then because strangely by next morning there are not that many in the trap. Don't think the skinner trap I use is that good at stopping them escaping!!!The Robinson trap is better I believe but I can't justify the cost of a new trap :(