Signs of Growth in the Garden

Sorry for lack of posts recently. I haven't really had chance to get out anywhere interesting and on the occasional day when I have had a few hours spare time its been raining or snowing! Lo and behold I notice that blogger have yet again made a change - this time in the way you upload photos. It was a nightmare trying to separate the photos so I could type inbetween so I haven't a clue how this post is going to turn out!

A quick walk around the garden this morning revealed lots of signs of new growth.

I haven't a clue what this plant is called but I call it "Elephant's Ears" as it has huge fleshy leaves. I find it rather ugly but it does produce quite a lot of flowers. 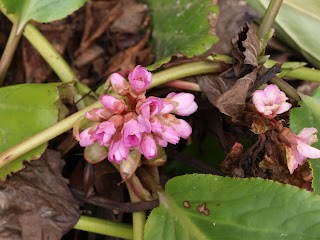 The wallflowers I put in pots last autumn are now producing buds. Hopefully in a few weeks they will be flowering and attracting some bumble bees. 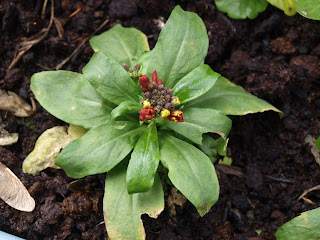 Winter Jasmine has been flowering for months 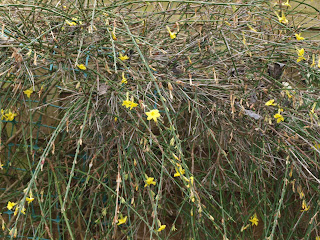 Buds are forming on the daffodils, 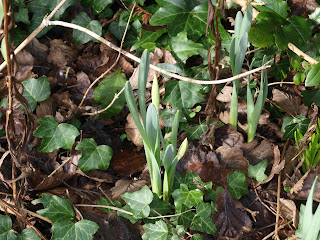 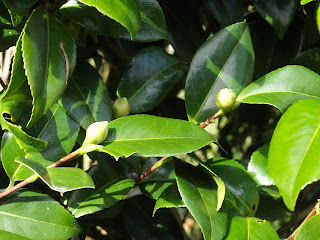 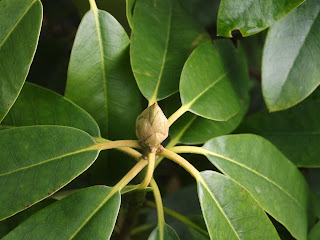 Primroses have been flowering for weeks now - looking a bit wilted today after a frost. 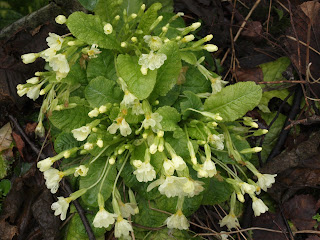 Daffodil and bluebell leaves in the wooded area at the top of the garden. 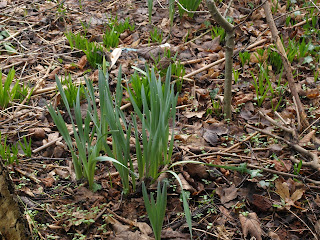 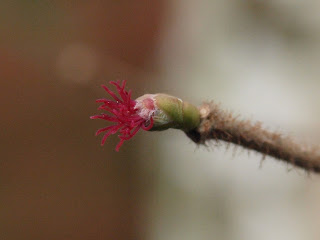 with lamb's tails (male catkins) above. 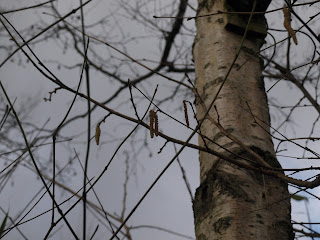 Sadly, the yucca which we have had for years has come to an untimely end - its only ever flowered twice. Husband thinks it was the weight of snow recently. I only hope it wasn't the intruder we had in the garden recently. An all round nightmare experience as he'd been seen roaming round gardens and then decided to exit via our garage roof jumping onto the bonnet of Emily's brand new car. Luckily, he was seen by a neighbour who called the police who managed to catch him. He has been given a prison sentence but unfortunately that means no compensation for Emily and she is now faced with a situation of paying for the repairs herself (quotes so far vary between £720 and over £1000!!!) or claiming on her insurance and paying the excess and losing most of her no claims bonus. Its not been a good month!!!! 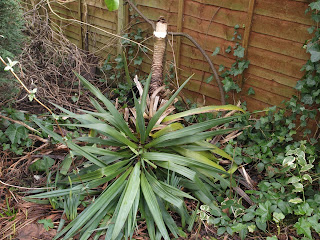 Recent gales have brought down a branch from the Eucalyptus tree. 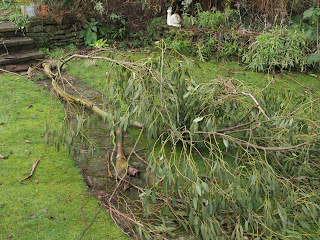 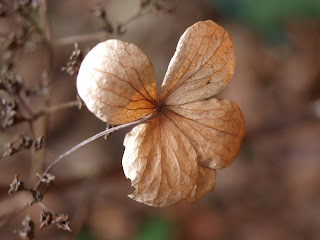 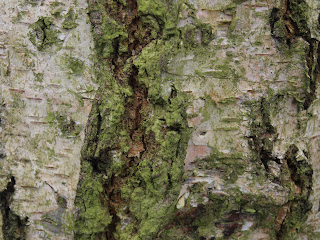 This is the old hanging basket on the patio where up to 5 wrens have been roosting. They are still ignoring the roosting pouch above it even though the basket drips with rain when its wet. 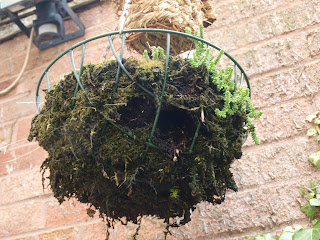 I was really pleased to receive this Green Man from David for Christmas - its now hanging in the porch. 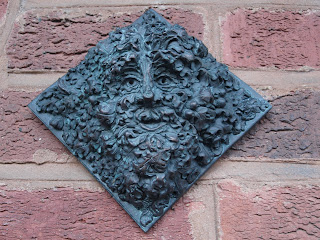 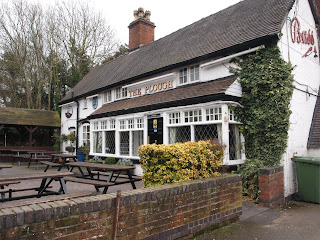 and here's one of the Pom Pom ducks wandering round the car park. 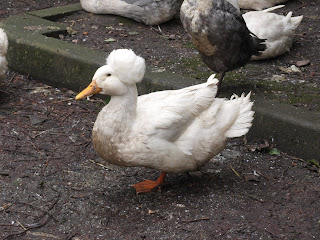 Great post & pics there Caroline. I`ve not been out in my garden for a while now...but that will all change this coming week.

Dean - Many thanks. Must admit its my first walk around for a while apart from dashing out to refill bird feeders! Look forward to seeing some more new discoveries on your blog next week :)

Hi Caroline :-) A lovely post and photos again. All those signs of Spring in your garden are so welcome. I think your Elephant's Ears plant is Bergenia. I have it in my garden but it never grows very well...I expect I have it in the wrong place...I do like the flowers though and the fact it is one of the first of the year. It seems very early for Primroses, I love them, my very favourite wildflower.

You are so lucky to have the Wrens roosting in the basket. I have some of those pouches and have a feeling they have never been used. The Pom Pom Duck made me smile. There is a pub near us where we sometimes stop on the way home from trips out and they have fancy ducks which beg for crisps or whatever people are eating at the garden tables :-)

So sorry to read about your intruder! It's a horrible feeling to know someone has been invading your personal space. I remember a few years ago we found our garden table in one of the flower borders by the fence complete with muddy marks where someone had clearly used it to climb into our neighbour's garden. Thankfully, there was no damage or signs of any attempt to break into the house or any of the neighbouring houses as far as we knew so maybe they were disturbed. It is a very unpleasant feeling though. What a shame about your daughter's car. It seems grossly unfair that she has to bear the cost, is there no way the perpetrator can be made to pay?

Sorry for the (as so often!) overly long comment!

What a lot of lovely pictures! Is your unidentified plant possible Bergenia?

My Wallflowers have been flowering since October I think.

An anxious time over the intruder, I hope that your neighbour can get her car fixed.

Shy Songbird - Hi Jan :)Many thanks for your lovely comments - the longer the better! :) I've googled Bergenia so thanks for the id :) It is straggly but as you say one of the first to flower. We have several mahonias and they never grow well for some reason and yet I see them every where with great yellow spikes of flowers - must be doing something wrong there too!

I've never seen anything go in the roosting pouches either! The first time I saw the Pom Pom duck I thought someone had actually stuck the pom pom on its head :) It was only when I got on the internet that I realised it was a species :)

Thanks for your kind thoughts re: Emily's car. As you say it is all horrible but I am just thankful the house wasn't broken into which was my first thought when the neighbour who saw it happen rang my mobile (Emily and I were out at the time).

The police said at the time that if he went to prison compensation wouldn't be awarded as courts believed prison was punishment enough!!! It does seem really unfair - I think the only other option is a private prosecution but I suspect even then if awarded they would look at his income (presumably he doesn't work) and would say he only had to pay 50p a week. Brian was going to look at household insurances to see if we have legal expenses cover. The horrible thing is he lives very local so I shall be constantly checking the garden :(

Toffeeapple - Many thanks :) Jan thought Bergenia too so thanks to both of you for id :)

Lovely to hear your wallflowers have been in flower over the winter to give some garden colour :)


Em Parkinson - Many thanks :) the hazel flower is lovely - so tiny and so easily missed!!

All those lovely signs of spring in your garden!
I`ll put in another vote for Bergenia.

It seems very unfair for Emily to have to bear the cost of the damage to her car. I hope something can be sorted out.

Dartford Warbler - Many thanks especially for good wishes re: Emily's car :)

I've made a note in my diary re: Bergenia :)

my goodness - what a time you've been having.. and then when something simple like blogger plays up it's almost the last straw!!

How frustrating that Emily's had to bear the cost of someone else's criminal activity!! Life isn't fair is it!!

But your pictures are excellent and it's great to see the beginnings of Spring.. my favourite month!

sorry about your daughters car :(

it's great to finally see hints of spring eh!

Tricia - Many thanks for your kind words :)

Life as you say isn't fair and sadly although you try and protect children when they are little at some stage they learn the hard way!

Its really beginning to feel now that Spring is on its way :)

Many thanks - still trying to get more quotes for her car!

Better pull that hedera helix out of the daffodil bed... That stuff takes over!
Is that your duck? I've seen chickens with that top knot, but this is the first time I've seen it on a duck! Cute... It would look really good in my oven...
The garden is definitely waking up!

Must admit we have ivy everywhere - use it for ground cover :)
No, not my duck though it would look nice on my pond :) Ducks and hens belong to the pub and often wander round the car park.
Definite signs of Spring now :)